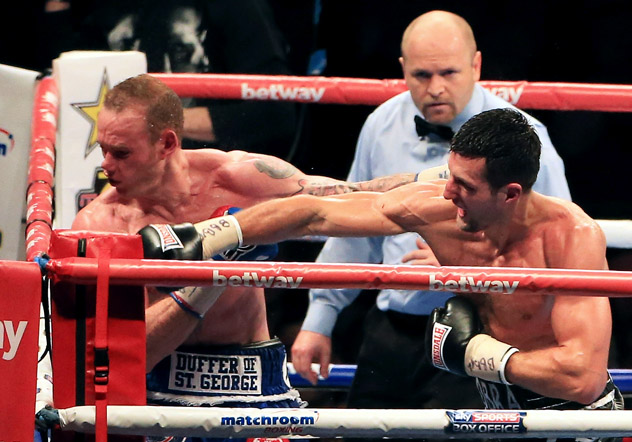 Carl Froch: “I said from the start that this was potentially a legacy fight. My legacy was at stake tonight and I didn’t want to finish my career on a loss to George Groves. I lived like a monk for three months and I’ve put my body through so much pain and it was hard. I’ll take the entire summer off before I even think of doing anything else. I don’t know what Eddie (Hearn) can offer me which can top that tonight. Maybe and I’d like to fight in Vegas and get my name up in lights.”

George Groves: “I’m obviously gutted. I felt I was boxing well but I got caught with a shot and that’s boxing. Fair play to Carl Froch because he got the job done and he was the better man on the night. I’m sure I’ll have a long and successful career ahead of me. Thanks to everyone for putting this fight together and I think the event surpassed everyone’s expectations. I plan to be world champion and I’m sure with the help of these two guys (trainer Paddy Fitzpatrick and promoter Kalle Sauerland) I will be. I got complacent tonight and let myself down.”

Eddie Hearn: “It’s difficult to say where Carl goes from here. It’s up to him and his trainer, Robert McCracken, to make a decision based on the opportunities I put in front of them. They may like what they see, or they may not, but tonight is about celebrating a great night for British boxing. You just cannot keep Carl Froch down.”

Kalle Sauerland: “The difference was experience tonight. George got complacent for a split second and although I had him ahead, it only takes one punch. We’re very lucky to have signed George Groves and we’ll have him back out very soon. At 26 years of age, with twenty one fights under his belt, he has just sold out Wembley Stadium and fought in front of 80,000 fans. We have plans, but we won’t be disclosing them at this time.”

Tom Gray is a member of the British Boxing Writers’ Association and contributes to various publications.  Follow him on Twitter: @Tom_Gray_Boxing