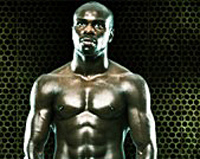 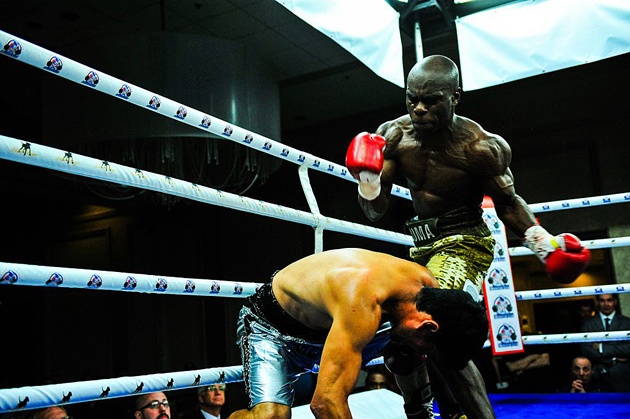 Photo courtesy of Eye of the Tiger Management

Ghislain Maduma enters the lion’s den on Saturday when he meets British lightweight contender Kevin Mitchell in an IBF title eliminator on the undercard of the highly anticipated Carl Froch-George Groves rematch.

“I’m really excited about fighting in England,” Maduma, who fights outside his adopted home of Canada for the first time, told RingTV.com “This is a very, very big fight for me. I had a plan for this year. The first step is winning this fight, the second is to be world champion.”

Before the unbeaten 29-year-old Congolese fighter can zero in on one of the current world champions he has to get past two-time world title challenger Mitchell.

“He is a very good technical boxer with good speed and footwork,” Maduma said of Mitchell. “What we plan to do in the fight I can’t say now but we do see some holes in his defense.”

Along with Mitchell-Maduma, the SKY Sports Pay-Per-View event (HBO in America) from Wembley Stadium, London, England is headlined by Froch vs. Groves II, and supported by IBF 168-pound eliminator James DeGale vs. Brandon Gonzales. Rounding out the card will be an a bantamweight bout between Jamie McDonnell against Thailand’s Tabtimdaeng Na Rachawat.

Anson Wainwright – What are your thoughts on fighting Mitchell?

Ghislain Maduma – This is a very, very big fight for me. I had a plan for this year. The first step is winning this fight, the second is to be world champion.

AW – When you look at Mitchell, what do you see in terms of his skills and areas of weakness?

GM – He is a very good technical boxer with good speed and footwork. What we plan to do in the fight I can’t say now but we do see some holes in his defense.

AW – The fight takes place in London, England. It will be your first pro fight outside of Canada. What are your thoughts on that?

GM – I’m really excited about fighting in England. Every top fighter must fight outside of his country and comfort zone. I’m looking forward to fighting outside of Canada, not that I haven’t wanted to but this is my first opportunity to do so as a professional. I fought in African and Europe as an amateur. This is going to be a tough fight but I will show that I’m one of the top lightweights in the world.

It’s an honor for me to fight on such a big card. I am training four times harder to bring my skills up to the level of this great event.

AW – The fight will be chief support to the highly anticipated Carl Froch-George Groves rematch at the Wembley arena in front of 80,000 fans. What are your thoughts about appearing on such a big card?

AW- You beat John Carlo Aparicio back in February. Talk us through that bout?

GM – I was really happy with my performance. I knew Aparicio was a tough, experienced fighter. I wanted to break him down and stop him later in the fight. Things went better than expected and once I felt I hurt him in the third round, I just finished the job. It was very important for me to start the year with a big performance and now I am focused on my May 31 world title eliminator.

AW – You’re from Congo. What was your youth like growing up there?

GM – I was 12 when I moved from Congo to Canada. I was very young and don’t remember much from when I was kid. I went back there in 2007 and it’s truly a beautiful country with a great boxing history, mostly known for the [Muhammad] Ali-[George] Foreman fight in the ‘70s. Canada is very different from Congo in almost every way; the culture, climate, etc. One similar thing is the language where both speak French.

AW – What for you was the most difficult thing about relocating to Canada? Do you visit Congo often?

GM – At first, the most difficult thing was the weather. It’s so cold here sometimes! I also miss members of my family that still live back there. Even though I came here as a kid, I still have some good memories with them. And I miss the weather! (laughs)

AW – How did you become interested and then take up boxing?

GM – My uncle introduced me to boxing when I came here to Canada. We used to watch boxing fights together. He had this huge collection of video tapes of fights and documentaries, so I was spending most of my free time watching boxing videos from 12 to 15-years old. Then one day, we were watching Roy Jones fighting Richard Hall in 2000 and I told my uncle it seemed easy. I thought I could do what Roy Jones was doing, so he told me to try and that’s where it all started.

AW – You had around 80 amateur fights. What could you tell us about your amateur career? Did you fight at any big tournaments and what titles did you win?

GM – I fought mostly in Canada and Quebec. I was five-time Quebec champion and Canadian junior champion once. I was on the Canadian Senior Team B. I participated in the 2005 Francophone Games, 2007 World Championships in Chicago, and 2008 Olympic Qualifiers in Namibia, Africa.

AW – Let’s talk about the lightweight division, what are your thoughts on the division as a whole?

GM – It’s going to be a very exciting division for the next few years with a newcomers like Crawford and Figueroa, veteran champion Vazquez, and others. It may not have big names right now but it will after the Gamboa-Crawford fight. It’s very exciting for me to be part of the lightweight division.

GM – Figueroa has a very exciting style. This guy is going to get better and more popular because of his style.

Last year, Abril did not do much so he’s one to watch to see what he can do. He is a good technical fighter like most Cubans. I think Vasquez is one of the strongest, most experienced champions and the guy I’m looking to fight very soon. He’s a very good boxer whose only losses on his resume were to very good fighters (‘Canelo’ Alvarez twice and Timothy Bradley – all by decision). He is a proven world-class fighter.

Crawford is the top lightweight in the world right now. I put him at No. 1 on the list because he has the most skills. But he’s still improving.

AW – In closing do you have a message for Kevin Mitchell ahead of your fight?

GM – I’m a professional boxer. I’m sure he’s taking me seriously so I don’t have anything to say to him in advance of our fight. I’m training hard to be at the level of this event. I’m just focused on myself.