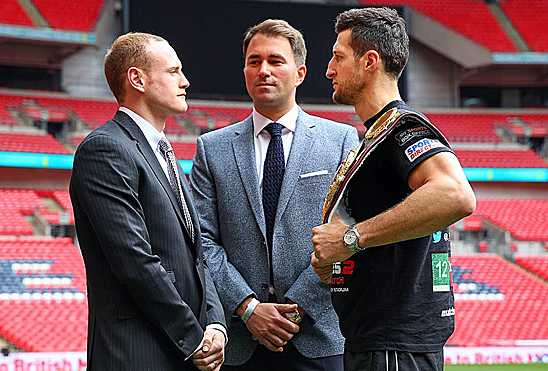 RingTV.com has a live round-by-round update of Saturday's rematch that ended via eighth-round technical knockout following a thunderous, head-swiveling right hand shot  to the chin by IBF super middleweight titleholder Carl Froch over challenger George Groves at Wembley Arena in London on HBO.

The blistering volley followed a left hook by Froch, ending the fight at the 2:34 mark even though he was out-landed, 126-to-96 overall. Froch had an advantage in power shots, 56-to-43.

In their first fight in November, Froch (33-2, 24 knockouts) had to rise from a first-round knockdown to secure a disputed ninth-round stoppage over Groves (19-2, 15 KOs) in Manchester, England.

Since their last meeting, Groves turned 26 in March and had vowed to win the return bout "in three rounds" against Froch, whose 37th birthday is in July.

Since falling to RING super middleweight champion Andre Ward by unanimous decision in their December 2011 bout for the RING, WBA and WBC belts, Froch has won five straight fights, four by knockout.

THE RING’s number one-rated 168-pounder, Froch first faced Groves after having earned a unanimous decision over ex-beltholder Mikkel Kessler last May in a rematch of their April 2010 bout in which Kessler unanimously decisioned Froch as part of Showtime’s Super Six World Boxing Classic.

Prior to facing Kessler, Froch had earned consecutive stoppage victories over Philadelphia’s Yusaf Mack in the third round and previously unbeaten IBF beltholder Lucian Bute in the fifth in May and November of 2012, respectively.

On the Froch-Kessler II undercard, Groves scored his third straight stoppage victory in the fifth round over Noe Gonzalez, ending his winning streak of two consecutive first round knockouts.

George Groves enters the arena first to cheers from the crowd. Amazing pyrotechnics and fire blazing during the entrace of Groves, who poses on three different platforms prior to stepping through the ropes wearing a royal blue robe. Entire entrance incompasses more than five minutes.

Carl Froch being booed long before Michael Buffer even announces that he is about to enter. Froch, wearing a black T-shirt with white lettering, comes in unceremoniously with his entourage. Froch shadow boxes and pounds away at an imaginary opponent on a distant platform.

Groves pacing back and forth in the middle of the ring, looking to make eye contact with Froch, who refuses.

Michael Buffer: "Lady's and Gentlemen, LET'S GET READY TO RUMBLE!!!!"

Round 6: Trainer Rob McCracken asking for Froch to sit down on his body punches. Weisfeld has it 49-46 for Groves. Froch hammers home a right, left and right along the ropes against Groves early. Froch stepping up the pressure, as he was asked to by his trainer. Right by Groves. They trade jabs. Another jab by Groves. Jab and right to the body by Groves. Double-jab by Froch. Jab and jab by Froch, followed by a right. Four-punch combination for Froch. Jab by Groves. Two more Groves jabs. Left hook by Froch, right and then a left to the body all by Froch. Jab and a right by Froch. Froch lands a left, right and left on the ropes prior to the bell. Froch, 10-9; Even, 57-57.

Round 7: Weisfeld has it 58-56 for Groves. Jabbing contest early, with the fighters trading evenly. HARD LEFT JAB-HOOK BY GROVES SNAPS FROCH'S HEAD. Groves gets busy behind the jab and a couple rights. Double-jab by Groves. It's a solid punch. Left and right by Froch and then a clinch. Left by Froch, right and left by Groves. Two jabs to the body and one to the head all for Groves. Groves beating Froch to the punch again. Right by Froch, left by Groves. HARD LEFT HOOK BY FROCH and drives Groves to the ropes with a succession of body shots. Right hand fo Froch. Groves, 10-9; Groves, 67-66.