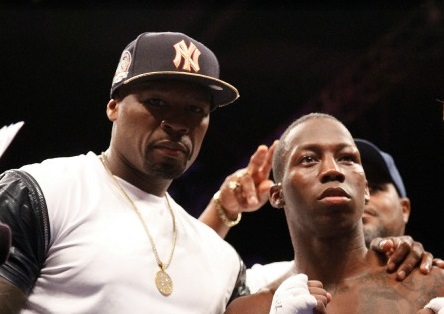 Unbeaten junior lightweight Mark "Too Sharp" Davis will face Michael "Hammer Fist" Farenas on a July 2 card that will be promoted by 50 Cent's SMS Promotions from the MGM Grand Theater in Fox Tower at Foxwoods Resort Casino in Mashantucket, Conn., on ESPN2's Friday Night Fights, according to a release.

Farenas (38-4-4, 30 knockouts), 29, will be after his fifth straight stoppage win since falling by unanimous decision to unbeaten Yuriorkis Gamboa in December 2012 and was last in action for a second-round stoppage of Hector Velazquez in March.

Davis (18-0, 5 KOs), 27, is coming off a unanimous decision over Carlos Vinan in September and will face Farenas in an IBF eliminator for the right to be named mandatory challenger to the winner of a July 10 rematch between titleholder Argenis Mendez and Rances Barthelemy.

The Mendez-Barthelemy bout, scheduled for Miami, became necessary after Mendez's controversial second-round knockout loss to Barthelemy in January in Minneapolis was ruled a "no-decision" by the Minnesota Department of Labor and Industry, restoring Mendez as the IBF's junior lightweight titleholder.

"I'm thrilled to return to Foxwoods Resort Casino, celebrating my birthday yet again with ESPN Friday Night Fights," said 50 Cent, who will turn 39 on July 6. "Last year was such a success; I couldn't pass up the opportunity to do it again and deliver an amazing night of boxing. All of the fighters on the card bring strength, power, endurance and agility to the sport. It's a night you won't want to miss."

In the co-feature, ex-IBF featherweight titleholder Billy Dib (36-3, 21 KOs) will rise to the junior lightweight division for a match-up with former title challenger Alberto Garza (26-7-1, 21 KOs).

Dib, who turns 29 in August, returns to the site of his split-decision loss to Evgeny Gradovich, who dethroned him for the IBF title in March 2013. Dib rebounded from that setback with a majority decision over Mike Oliver in July but fell to Gradovich by ninth-round stoppage in their November rematch.

Garza, 28, lost his last fight in March by unanimous decision to Jose Pedraza following a seventh-round knockout win over Eduardo Rios in January. The Rios fight was preceded by a fourth-round stoppage loss to RING number five-rated 126-pounder Nicholas Walters.