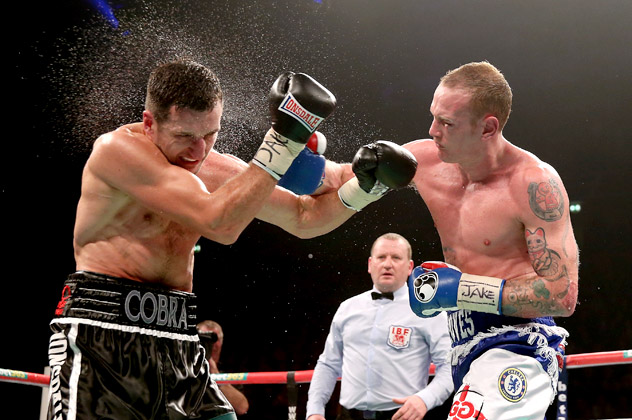 Although it was a first-round right hand by George Groves that floored IBF/WBA super middleweight titleholder Carl Froch during Groves' disputed ninth-round stoppage loss in Manchester, England in November, the 26-year-old challenger said at a Thursday press conference at Wembley Arena that "it will be the left hook that finishes" Froch on Saturday.

"This couldn't be more perfect really," said Groves (19-1, 15 knockouts) of his rematch at Wembley with Froch (32-2, 23 KOs), who turns 37 in July. "I'm going to become world champion in London. It will be the left hook that finishes Carl Froch on Saturday night."

A confident Groves has vowed to stop Froch "in three rounds" on Saturday.

Taking place in advance of his company's June 6 ESPN2 Friday Night Fights event promoted by Iron Mike Productions at Turning Stone Resort and Casino, Verona, N.Y., Tyson and Holmes will recount Tyson's fourth-round stoppage of Holmes in 1988 and take questions from the audience. The event is free and open to the public.

A highly-decorated amateur boxer with more than 500 matches, Khytrov was a 2011 gold medal performer at the World Championships in Azerbaijan when he defeated Japan's 2012 Olympic gold medalist Ryota Murata in the final.

The nationally televised fights represent Tyson's second appearance at Turning Stone within the past year, having first appeared there last August for his debut as a boxing promoter.

"One of the most important objectives for Interbox and for GYM is to work together on signing and developing talented boxers that we believe can become future stars in Quebec and throughout the world," said Jean Bedard, president of Interbox. "For us, Dinu certainly fits these parameters. To prove his seriousness, Bogdan confirmed to us that he is in the process of moving his family here to Montreal."

A professional since April 2008, Dinu will be in action on Saturday at Vaudreuil Arena in Vaudreuil-Dorion, Quebec, Canada, against American Avery Gibson (3-3-2, 1 KO).

"I dreamed for a long time to sign a contract with an important organization and now I have the support of two – Interbox and GYM," said Dinu, who has been training for the past two weeks in Montreal under Stephan Larouche, cornerman for southpaw former IBF super middleweight titleholder Lucian Bute.

"My good friend Lucian Bute invited me here. Boxing is very big here and I want to stay here and inspire myself from Lucian's accomplishments. I will move here with my family and learn French to be closer to my fans. The experiences and advice from Lucian is very precious for me."

Bogdan already is familiar with Quebec, having scored a fourth-round stoppage of Eric Martel Bahoeli on the November 3, 2012 undercard of Bute's unanimous decision over Denis Grachev at Bell Centre in Montreal.

"The signing of Dinu to a contract is another step in the evolution of of the partnership between Interbox and GYM," said Yvon Michel, president of GYM. "We will continue to work together to offer our boxers numerous occasions to perform, as well as offering our public excellent boxing galas."