Miguel Cotto: Freddie Roach to bring out ‘the best’ versus Sergio Martinez 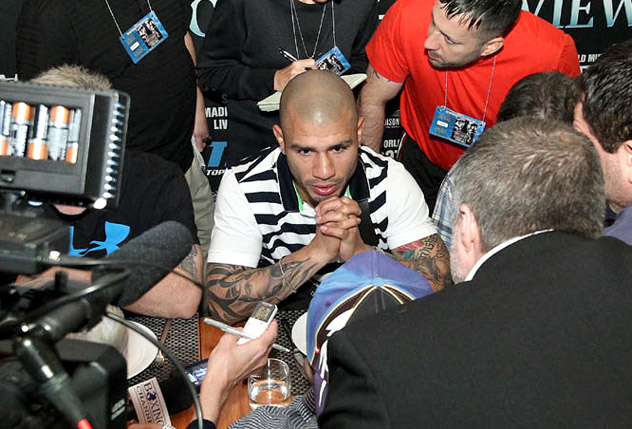 HBO has provided a training blog taken from an interview on Monday with three-division titlewinner Miguel Cotto in advance of his June 7 HBO Pay-Per-View challenge of RING and WBC middleweight champion Sergio Martinez at New York's Madison Square Garden.

Click here for HBO's Face Off with Max Kellerman: Cotto-Martinez

Cotto (38-4, 31 knockouts) will be working in just his second fight with trainer Freddie Roach as he ascends to the middleweight division to target a title in his fourth weight class. In their first fight together in October, Cotto, 33, dominated junior middleweight contender Delvin Rodriguez, stopping him in three rounds.

Cotto has, at times, trained alongside his former foe Manny Pacquiao at the Wild Card Boxing Club in Hollywood with Roach.

Martinez (51-2-2, 28 KOs) of Argentina has been champion for four years since defeating Kelly Pavlik by a bloody unanimous decision. Martinez hasn't tasted defeat since 2009 during a "Fight of the Year"-caliber brawl with Paul Williams but at 39, has begun to slow down precipitously. He may be ripe for the taking against Cotto.


Question for Miguel Cotto: Training with Freddie Roach must be a different experience for you. Can you describe why he's one of the best trainers in boxing?

"Freddie is a great person and a great trainer who understands our sport. He was a fighter and has trained some of the best boxers in the world over the last 10-to-15 years. He is a true professional that knows how to get the best out of every fighter that he trains.

"He makes everyone better and his preparation for each fight is second-to-none. He has a complete vision and sense about what a fighter thinks. We have both developed a great relationship based in respect for each other.

"He knows me very well and knows what I may think in certain moments. It has been a great experience working together with him. Ever since day one, I felt very much at home with him and understood what I need to do.

"He has a great team behind him that gives me great support as well. He is able to focus on boxing because he knows that he can trust his team to get me in the best condition possible so that I can be the best fighter possible.

"It's not only about him having the boxing knowledge but is about knowing how to apply it to each individual boxer. He had a big win last October in Orlando, Florida against Delvin Rodriguez and now on June 7 in New York, we will have a huge victory that both of us will celebrate.

"I have put my career in his hands because I know he will get the best out me and I will give him my best during training and in the ring.