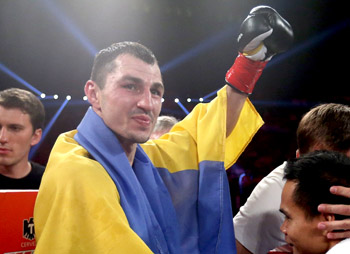 17
May
by Michael Rosenthal 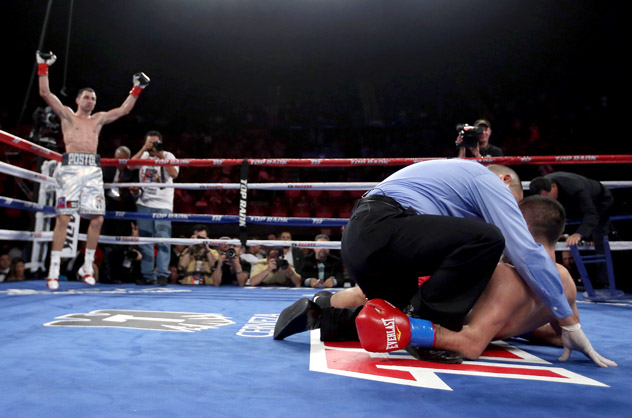 Viktor Postol celebrates his knockout victory over Selcuk Aydin at The Forum in Inglewood, Calif., on May 17, 2014. Photo by Jeff Gross/Getty Images.

INGLEWOOD, Calif. – Viktor Postol doesn’t look like a world-beater but he keeps on winning.

The tall, lanky Ukrainian stopped Selcuk Aydin at 2:52 of the 11th round of a junior welterweight fight on the Juan Manuel Marquez-Mike Alvarado card Saturday at the refurbished Forum to solidify his position as the WBC’s No. 1-ranked contender.

Danny Garcia, THE RING champ, holds the WBC title but has talked about vacating and moving up to welterweight. That could set up a title fight between Postol and Lucas Matthysse, who was ranked No. 3 (behind Aydin) going into Saturday.

Whomever Postol takes on next will be face to face with a capable fighter.

Aydin, who at 5-foot-7 is four inches shorter than Postol, took the fight to his opponent in the early rounds. He found a way to get inside the taller man’s jab and do some damage in what appeared to be a competitive fight.

However, after about three rounds, Postol, a methodical, stand-up boxer with minimal power, picked up his output of quick jabs and straight rights to outwork and frustrate Aydin for the rest of the fight and seemed to be on his way to a points victory.

Then, out of the blue, Postol punctuated a three-punch combination with a perfect right uppercut that sent Aydin crashing to the canvas. The rugged Turk was clearly hurt badly, prompting referee Raul Caiz Jr. to end the fight without counting.

Postol (26-0, 11 knockouts) threw a remarkable 1,105 punches, according to CompuBox. And he outlanded Aydin in total punches 395-118, clear evidence that the Ukrainian had outworked his foe.

In the end, though, all he needed was one of his 235 power punches he landed to secure a shot at a world title.

Aydin (26-3, 19 KOs) came to the U.S. with a perfect record and high hopes in 2012. However, he lost back-to-back fights against Robert Guerrero and Jesus Soto Karass and is only 3-3 in that time.

Magdaleno (26-1, 10 KOs) came out firing from the opening bell, pounding Bravo (21-4, 9 KOs) with hard punches to the head and body in high volume, while taking relatively few in return.

The Las Vegan seemed to be on the verge of stopping Bravo in the fourth round when he hurt the Chilean with a double left to the head and a left to gut that sent Bravo to one knee. Bravo survived but was outworked the rest of the way.

Magdaleno won by scores of 80-71, 80-71 and 79-72. He has now won three in a row since his tight split-decision loss to Rocky Martinez for the WBO junior lightweight title last year.

Bravo was fighting for the first time in the U.S. and only the fourth time outside of Chile.

Valdez, quick, skillful and powerful, dominated Echevarria (11-3, 6 KOs) from the beginning but the Puerto Rican was resilient, taking many hard shots and getting in some of his own.

However, by the end of the seventh round, the ringside physican decided that Echevarria had taken enough punishment and stopped the fight.