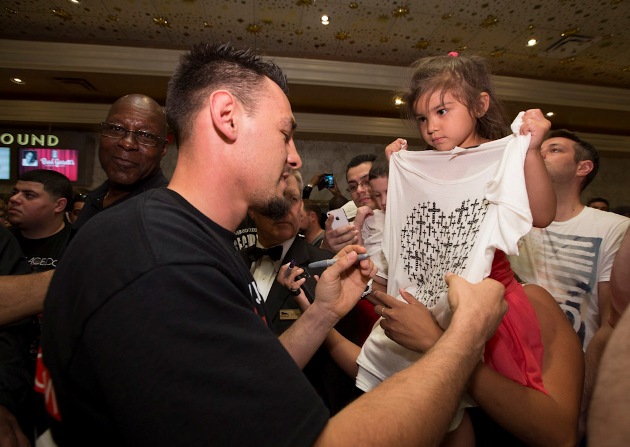 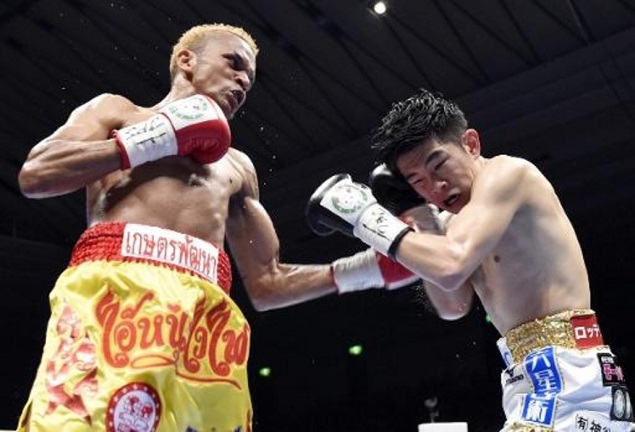 Ruenroeng, 34, befuddled the former two-division world champion, neutralizing his skills to score an impressive split decision victory by scores of 114-113 for Ioka, overruled by the 119-108 and 115-112 scores in favor of the new champion.

Making the win even more impressive is Ruenroeng’s past. Back in 2006, he went to jail for the third time, sentenced to 15 years for committing robbery. Boxing proved an unlikely salvation for the Thai boxer. He took part in the prison boxing program which saw him win a national title the following year.

After the victory, Ruenroeng was released from prison for good behavior. He would go on to represent his country at the 2008 Olympics.

The second-grade dropout and former drug addict freely admits, “I should still be in jail.”

Earlier this year, he completed his Cinderella story with a unanimous decision over reigning OPBF 112-pound champion Rocky Fuentes to win the vacant IBF flyweight strap.

Amnat Ruenroeng – Ioka is good boxer and he improved a lot in the ring. I prepared very well to fight him. I felt confident in the ring and feel my performance was good too.

AW – When the result was announced as a split decision win, what was your reaction?

AR – I am shocked to know the first judge had me losing and know the last two judges saw me win. I knew my belt would still be with me and I am very happy.

AW – Tell us about your trip from Thailand to Osaka, Japan.

AR – It is about six hours by plane and then we take the train to the hotel. The promoter took care of us and the Japanese people are friendly.

AW – It's still early but who are you looking to challenge next?

AR – [Top Rank Promotions CEO] Bob Arum told me in Macao, China that Zou Shiming wants to challenge me for the IBF title in the fall of 2014. However, I will do the next fight for the IBF mandatory first. I will wait for the IBF to notify the mandatory challenger.

AW – Many Thai boxers have previous Muay Thai backgrounds. Did you?

AW – Your life before boxing was very eventful. Could you tell us about what happened altogether?

AR – I was the kid in the street. I never knew who my father was. My mother never told me who he was. I live by fighting. My life is boxing and boxing. I was a street fighter. I grew up on the streets and fighting for a living. I could not go to school because my family is very poor. Muay Thai changed my life. I can help my family by fighting in Muay Thai and I became the Muay Thai champion. I lost to the champion later and had no money to save my family. I did a robbery and went to the jail. I did not know the lawyer and I thought my life was going to end in jail. But I was very lucky. Jail had an inaugural boxing project for prisoners to participate in a national amateur tournament. I learned amateur boxing in jail. I won all my fights and became a national amateur champion.

After I got out of jail, I represented the Thailand team and fought in my first international tournament, “The King’s Cup.” I beat Zou Shiming, who is a high-profile boxer. Before the fight, my team did not expect me to beat Zou Shiming because I am a replacement boxer – but I did it.

AW – Could you tell us about when you beat Zou Shiming?

AR – I beat Zou Shiming in the 2007 “King’s Cup” international amateur boxing tournament in Thailand. Zou outclassed Thailand's Suban Pannon in the 48 kilogram (about 106 pounds) final at the Asian Games in Doha, Qatar in December. The Chinese aimed for him to become his country's first-ever Olympic boxing champion at the 2008 Beijing Games. The Thai, Suban Pannon wanted to avenge his defeat against Zou but got injured in training. He was ruled out of the “King's Cup” and replaced by me from the B squad. I lost to Zou Shiming in 2010 in the Asian Games final in China. I believe I should have won that fight and beat him very clearly. Zou Shiming got the gold medal. I got the silver medal.

AW – So boxing really did save your life.

AR – I was proud to be on the Thailand national team and fighting for the Thailand team…I made the wrong life decisions and went to jail. My life would have been finished in jail but I am very lucky that boxing gave me another chance. I beat other amateur boxers in Thailand and beat Zou Shiming in my first international amateur fight. They knew I was good in the amateurs.

AW – Going from jail to representing your country at the 2008 Olympics is a huge step. It must have felt like a dream.

AR – I worked hard to become a medalist in 2008. The judge was not fair. I was sure I would beat Zou Shiming in the 2008 Olympics.

AR – I am married and have one son who is five years old. I love my boy. I want him to get the highest education.

AW – Do you have a message for the flyweight division?

[email protected] and you can follow him at www.twitter.com/AnsonWainwright.