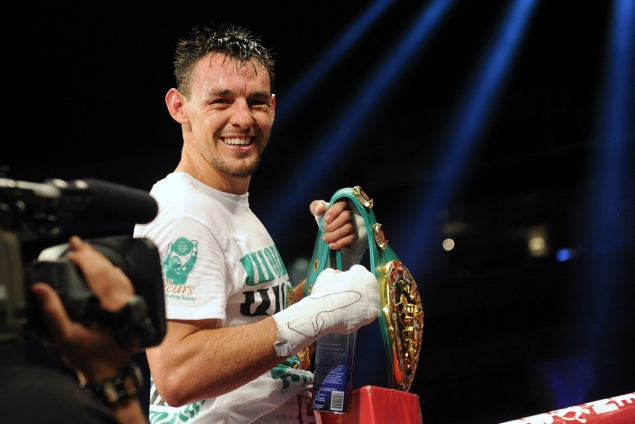 Multi-division titleholder Robert Guerrero discussed his upcoming fight with Yoshihiro Kamegai, which headlines a Showtime tripleheader on June 21, Floyd Mayweather Jr., his desire to face Danny Garcia, and other subjects in a Q&A with RingTV.com.

Guerrero (31-2-1, 18 knockouts), a 31-year-old veteran from Gilroy, Calif., also spoke bout other welterweight standouts such as undefeated IBF beltholder Shawn Porter and unbeaten contender Keith Thurman, and touched on his attempt to gain seperation from Golden Boy, even as the promotional company's CEO, Richard Schaefer, had insisted Guerrero's contract was valid.

Having signed with powerful advisor Al Haymon in March, Guerrero will end a 13-month ring absence against the 31-year-old Kamegai (24-1-1, 21 KOs), who will be after his third straight stoppage victory since falling by unanimous decision to Johan Perez last June.

Guerrero earned a career-high $3 million for his last appearance, last May's unanimous decision loss to Mayweather, ending his seven-and-a-half-year undefeated streak. Guerrero had won 15 consecutive fights, having previously lost by a split decision to Gamaliel Diaz in December 2005 only to win their rematch with a sixth-round knockout the following June.

Guerrero will face Kamegai at the StubHub Center in Carson, Calif., on a card that will also feature featherweights Gary Russell Jr. and Vasyl Lomachenko in a clash for the WBO's vacant belt, as well as former welterweight Devon Alexander against Jesus Soto Karass.

Guerrero and Alexander are looking to remain in a star-studded group of 147-pounders that includes Mayweather Jr., Thurman and Porter, who dethroned Alexander by unanimous decision in December before scoring last month's fourth-round knockout of ex-beltholder Paulie Malignaggi.

RingTV.com: Why were you out of the ring for so long since last May — was it the situation with Golden Boy, looking for the right fight, what?

Robert Guerrero: Of course, being out of the ring was not ideal, but I'm not here to talk about the past. I'm moving forward and we are going to do some big things. I'm looking forward to being is some big fights.

RingTV.com: Richard Schaefer said that he went through Al Haymon to make your fight with Kamegai, but can you characterize your contractual relationship with Golden Boy as it stands now, and are the issues behind you, and is it an amicable relationship?

RG: I don't handle my boxing business decisions. I leave that to my team of [manager] Bob Santos, [manager] Luis Decubas, [advisor] Al Haymon along with Richard Schaefer. We had some issues, and all we wanted to do what was in the best interest of my career, which is to be treated right.

RingTV.com: Can you characterize your weight and your physical condition as far as training or activity while you have been out of the ring?

RG: Right now I'm in tip-top shape. I have been working Cross Fit for last few months (and) I feel unbelievable. My weight is good, at around 155 pounds. I’m ready to fight.

RingTV.com: When do you expect to begin seriously training for this fight as far as transitioning and arriving in Las Vegas (for camp)?

RG: I've already started serious training. I’m wrapping up my final days of sparring here in the Bay Area and will be heading to Las Vegas this weekend to finish off camp.

RingTV.com: Have you seen Kamegai, and if so, what are your thoughts on him? How you expect to fight him?

RG: I haven't seen tape on him yet, but I hear he's a good, strong fighter. He likes to come forward, so it will make for an entertaining fight for the fans. At this level, there are no easy opponents. I'll be fully prepared for whatever he brings to the ring.

RingTV.com: Assuming that you are successful against Kamegai, what is the fight you want most other than Floyd Mayweather Jr.?

RG: Danny Garcia. He's a great young champion and one of the best, and I think our styles make for a war. It's the old rivalry — Mexican versus Puerto Rican — and we both like to fight.

But right now, my whole focus is on Kamegai. There are a lot of great fights out there for me. My goal is to get back on top and regain my status as a world champion.

RingTV.com: How did you score the Mayweather-Maidana fight, and was there anything about it that surprised you?

RG: Yeah, I was there watching it live and I thought it was a great fight for the fans. Mayweather stood in the pocket and gave the fans a more exciting fight, which was surprising to me. Maidana did what he had to do and I thought it could have gone either way. But Mayweather might have pulled it off in the end.

RingTV.com: Your thoughts on Shawn Porter's past two fights with Devon Alexander and Paulie Malignaggi?

RG: Porter is a good young champion with a lot of heart and determination. He showed a lot in his last fights and I would love to get in there and mix it up with him.

RingTV.com: Your thoughts on Keith Thurman as a fighter?

RG: Thurman is another good young fighter with a lot of talent. He brings a nice skill set of boxing and punching power. I'd love to mix it up with him, too. People say I ducked him, but I didn't duck him.

I was offered half of my minimum to fight him, so why would I do that? I've earned my way to the top. He's a young star. It's a big fight, so we both should be compensated fairly. I would love to bang it out with him at some point.

RingTV.com: Would you like to fight either Porter or Thurman, and if so, why and how soon?

RG: I'll fight anyone, anytime, anywhere. First thing is first, though, and I have to do my thing against Kamegai and get back into the win column.

I respect all the fighters in the welterweight division working their way up the rankings. It's the hottest division in boxing. On this comeback trail I just want to do my talking in the ring and it starts June 21. I can't wait.

RingTV.com: Would you fight Devon Alexander should he be victorious against Soto Karass, or would that be a lateral step or a step backward?

RG: Let's see how he performs in his next fight. I want the best guys in the division or guys who are willing to put a war on for the fans.

RingTV.com: Finally, what is your mindset knowing that you'll be fighting on a regular basis from here on out.

RG:  You know, Lem, I've been out of the ring for over a year now, and I'm hungrier than ever. I've had time to reflect on my loss to Mayweather, and I’m so motivated to get back on top, words can't describe how I’m feeling.

Like I said, I'm going to let me hands do the talking and everyone will know what I'm saying once I get in the ring. It's on.