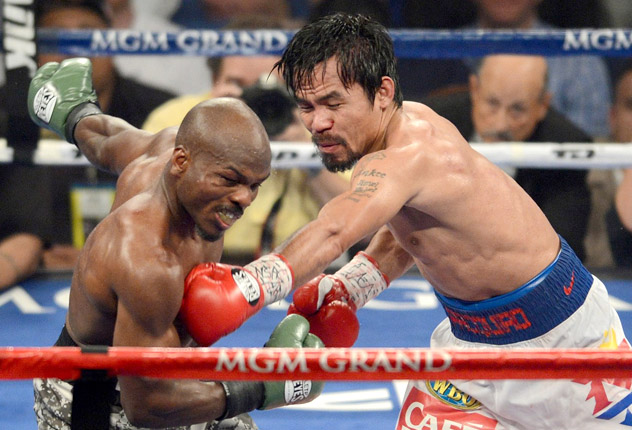 Pacquiao's victory regained the WBO welterweight belt he lost by split decision to Bradley in June 2012, this prior to Pacquiao being stopped in the sixth round by Marquez in December 2012.

"It was the best Manny Pacquiao," said Arum of his most renowned fighter, also the owner of stoppages over Oscar De la Hoya in 2008 and Ricky Hatton and Miguel Cotto in the second and 12th rounds in 2009, respectively.

"People look at the Cotto and Hatton fights and see Manny as this devastating knockout puncher, which he never was. Look at the fight against De la Hoya, where he threw punches in and out and more punches. That was the Manny Pacquiao that fought Bradley in their rematch."

In something of a homecoming for Marquez, the 40-year-old will face former 140-pound titleholder Mike Alvarado in Saturday's 144-pound bout at The Forum in Inglewood, Calif., the winner of which will be the mandatory challenger to Pacquiao.

"The Pacquiao that fought De la Hoya, that's Manny’s big style," said Arum, comparing the De la Hoya bout to that against Bradley. "[Pacquiao] punches hard; he moves and he is very hard to hit when he wants to be hard to hit. That was a magnificent performance by Manny Pacquiao."

Marquez was last in the ring in October losing via unanimous decision to Bradley.

Marquez's seeks a fifth fight with Pacquiao, against whom a win would make Marquez the first Mexican fighter to earn a fifth belt in as many divisions. Marquez is 1-2-1 against Pacquiao.

"My thinking is first things first.  My thoughts right now are on Mike Alvarado," said Marquez. "If I win the fight, then I will think about Manny Pacquiao. I will fight the fight on Saturday then go from there."

Denver, Colorado's Alvarado (34-2, 23 KOs), 33, is 1-2 over the course of his past three fights, all at junior welterweight. Alvarado was stopped in the seventh round by Brandon Rios in October 2012, won their rematch for the WBO's vacant 140-pound belt by unanimous decision in March of last year, then lost the title by 10th-round knockout to Ruslan Provodnikov last October.