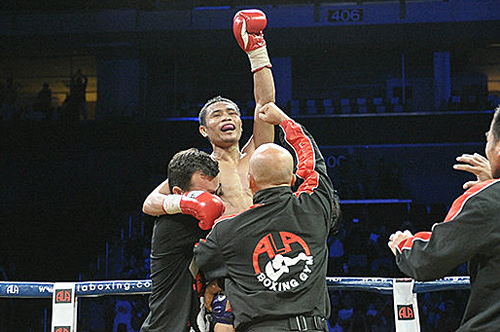 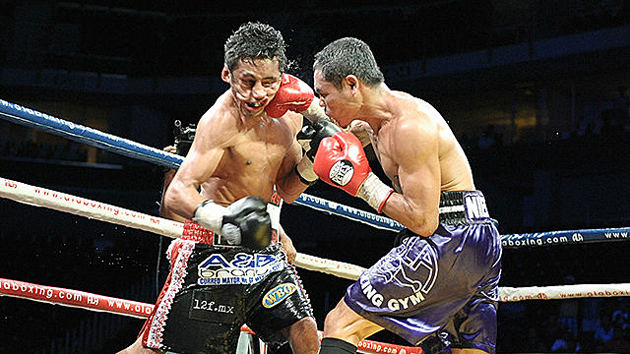 Donnie Nietes lands a crunching right to Moises Fuentes en route to stopping the contender in the ninth round to retain his WBO 108-pound title and earn THE RING junior flyweight belt. Photo by Denmark Dolores

MANILA, Philippines – Donnie Nietes celebrated his thirty-third birthday on Tuesday the same way he had celebrated most of his previous ones: a simple dinner with friends and family near his home on the island of Cebu in the Philippines.

“Twenty-three!,” Nietes is quick to interject with a laugh, perhaps feeling a bit younger than his age these days. This year, Nietes has found himself feeling more festive on his natal day, and for good reason.

Nietes was three days removed from a ninth-round knockout win over former WBO 105 pound titleholder Moises Fuentes at the Mall of Asia Arena in Pasay City, Philippines, the fourth defense of the WBO junior flyweight belt he won in 2011.

The fight was a defining moment for Nietes, who has spent most of his career cloaked in anonymity behind the greater star power of compatriots Manny Pacquiao, Nonito Donaire Jr. and Brian Viloria.

With the victory over Fuentes, Nietes closed the chapter on his rivalry with the Mexico City native who held him to a majority draw in their first meeting in March of 2013. He earned THE RING’s junior flyweight championship in the process.

“This is the most satisfying fight because last time I was a little bit disappointed because the people weren’t really satisfied with what I did last time,” said Nietes (33-1-4, 19 knockouts).

“It’s a big win for us,” adds Nietes’ trainer Edito Villamor. “This is the happiest moment of our team since we started boxing.”

For Nietes, the victory over the 28-year-old Fuentes – who holds KO victories over former champs Luis De La Rosa and Ivan Calderon – represents his first victory over a prime champion at the peak of his abilities. Though Nietes has consistently worn a world title around his waist since 2007, no single victory had brought him significant acclaim.

Neither of his title-winning efforts – the vacant WBO strawweight title win in 2007 and the win for the title he currently holds – were conclusive, dominant performances.

Nietes had beaten opponents that were well-regarded – just not at the time he beat them. Like in 2010, when Nietes traveled to Mexico to defend against a 10-5 fighter named Mario Rodriguez, whom he decisioned over 12 rounds. The win looked insignificant until Rodriguez knocked out previously unbeaten IBF minimumweight titleholder Nkosinathi Joyi.

Filipino fans tended to gravitate more towards the Devil May Care attitudes of his less accomplished stablemates AJ Banal and Rey Bautista, rather than the technically sound, cautious approach employed by Nietes.

“You can’t pick charisma,” Nietes’ promoter Michael Aldeguer told this writer last year. “I think Donnie’s style of fighting is not enticing to some of the fans. He’s also in a smaller weight division and his personality is not that very charismatic. But if you know boxing, you know he’s one of the best in his division.”

Against Fuentes, Nietes was decisive, seizing the opportunity to silence Fuentes’ threats and the criticism of his detractors.

“We studied the first fight and looked at the mistakes Donnie made,” said Villamor. “In the first fight, Donnie didn’t didn’t hit the body and was not using his jab. Also, he was waiting too much on Fuentes and allowed Fuentes to hit his body. Fuentes’ mistake is when he goes backwards he cannot punch and has less power.

“Our game plan was to use the jab more so that Fuentes cannot penetrate, and to watch his right hand and go to the body and his overhand right because Fuentes was easy to with it in the first fight. With [Donnie’s] conditioning, he delivered the game plan.”

Nietes has come along way since who first joined the ALA Gym at age 19, paying dues by sweeping the floors of the gym before his workouts. Nietes says he plans to defend his title once or twice more before moving to the flyweight division, where the likes of Roman Gonzalez, Juan Francisco Estrada and Akira Yaegashi await to provide Nietes with a new set of challenges.

Those are matters for another day. For now, there are candles to be blown out and cake to be eaten.

“I feel the fight last Saturday will get me the right recognition,” said Nietes. “I have been a champion for so long and I showed that I am a true champion.”

Ryan Songalia is the sports editor of Rappler, a member of the Boxing Writers Association of America (BWAA) and a contributor to The Ring magazine. He can be reached at [email protected] An archive of his work can be found at ryansongalia.com. Follow him on Twitter: @RyanSongalia.