Sergio Martinez: ‘I feared I would never walk again’ 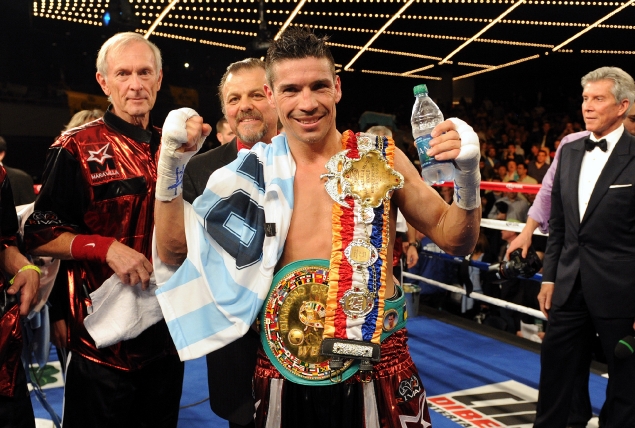 12
May
by Diego Morilla 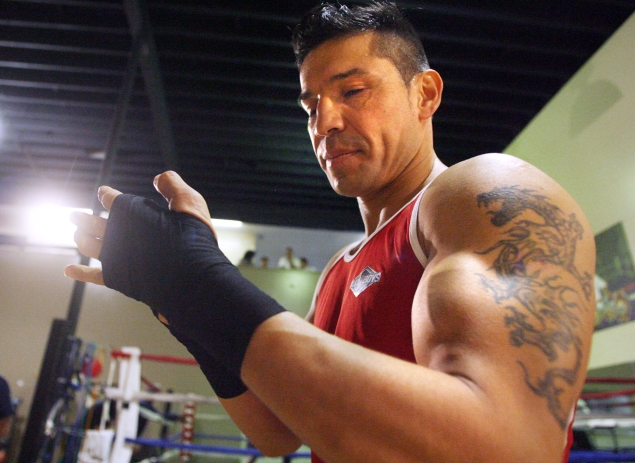 Sergio Martinez is preparing for a career-defining fight against Miguel Cotto on June 7 with his usual intensity and focus, away from the spotlight and the distractions. But this training camp has an additional factor weighing on the mind of THE RING’s middleweight champion, and this has caused him to make some dramatic changes in his training regimen.

“This year I’ve been dragging an injury that gave me a lot of headaches,” said Martinez in the last interview in his native Argentina before traveling to his home in Madrid (where he started his training camp on March 31). “My [right] knee injury was a true nightmare at times, but challenges are there to be overcome, and overcoming this injury was a very tough and important challenge to me.”

The continuity of his treatment was in fact so important that it became the most important reason for Martinez (51-2-2, 28 KO) to move his training camp from his second home in Oxnard, Calif., to a new location in the Miami area.

“There are several reasons for this,” says Martinez. “First of all, my physician (Raquel Bordon) has a small clinic in Madrid, and she won’t be able to work all the time with me, since she will have to come back to Madrid during the week.”

Helping his doctor avoid the grueling 20-hour trip and nine-hour time difference between Oxnard and Madrid was a deciding factor in this equation. But shortening the travel time to New York, where the fight will take place, was equally important.

“Miami is only six hours away [from Madrid]. But also, every time I had to travel from my home in Oxnard to my hotel in New York I would take up to 14 hours. And it’s brutal. I can’t have a 14-hour trip six days before the fight. Here in Miami there is no time difference, and the flight is only 2 hours.” [Editor’s note: In decent traffic, it takes about two hours to drive from Oxnard to Los Angeles International Airport. Tack on another two hours for parking and getting through securtiy, plus the 5 ½ hour flight, travel in New York, etc. … So, Sergio probably isn’t exaggerating.]

Martinez moved his training camp to Miami on April 27, and he will remain there until one week prior to the fight. And although he will complete the usual nine-week training camp to which he is accustomed, he feels lucky to have been cleared to train right on time after a lengthy recovery and a gruesome series of treatments.

“I was on crutches for a long time. Until December, I was walking on crutches. I was struggling. I used crutches since my surgery on October 31 until December 18. During all that time I was unable to lean on my right leg at all.”

The description of the added injuries seems to justify the harshness of the treatment.

“I had a partially torn meniscus. I had a breakage in the femoral capsule, right behind the knee. I had a post-operation infection right before the [Martin] Murray fight. I had partially broken cartilage, where the cartilage became like a small saw on my tibia. I had an injury in my ligaments as well, a distension of the ligaments. I also had chondromalacia patellae, which is the injury that occurs beneath the kneecap. That’s why they couldn’t find an integral solution, because there were many injuries together. And recovering from that, being 39 years of age, was difficult. But thanks to the doctors I am fine.”

And judging by the treatment and the series of surgeries prior to that, it seems that Martinez has a lot to be thankful for.

“They did some heavy treatment. They did a procedure to remove cartilage debris and other things from the meniscus area, and they had to regenerate the cartilage. They explained this to me, and it sounded a little bit extreme, but this is what they had to do. They had to provoke a series of micro-fractures on the bone, with something very similar to a needle.

“The bone then begins to bleed, and the blood from the bone, depending on the time you let it remain there, either becomes bone again or becomes cartilage, depending on the time you allow the bone to remain immobile. If you allow the blood to sit there and you don’t move the articulation, the blood becomes bone again. But if you move the articulation about 15 or 18 days after that, and you start moving it again and putting pressure on it, the blood becomes cartilage. And that’s what they did. And during that time, I didn’t move my leg but I did just enough work to create more cartilage.”

The extreme nature of the procedure, which included the removal of a piece of bone embedded deeply into his tendons, led Martinez to believe that his career was in jeopardy.

“At times, the fact that I wasn’t going to make it did cross my mind. I feared I would never walk again. But I always wanted to return to the ring, at least for one last fight. But now, with the way I am seeing my recovery, my position has changed. I am in much better spirits. I changed 100 percent. One thing is to know you have only one leg, and a very different one is to know you have all the weapons you need. I know that on fight night I will be feeling better than ever. It is something that I feel inside me. I feel very happy and motivated, and as long as I feel like that, I know I’ll be OK.”

Hearing a fighter indicating that he feels 100 percent before a fight is one of boxing’s foremost clichés, and Martinez did say the same thing in April of last year, before his bout against Martin Murray in Buenos Aires, only to reveal immediately after the fight that he had entered the ring with injuries in his knee and shoulder, adding a broken hand during the action.

“With Murray I was feeling 1500 percent,” exaggerates Martinez, “but four days before the fight I injured my knee, and I was not going to go out and say, ‘Hey, Martin, guess what? I just injured my knee.’” Martinez says this stressing that the fight was the most anticipated boxing event in his country’s rich history in the sport.

“I was not going to suspend that fight with only four days to go. They would have killed me! I could have never set foot in my own country! I thought, ‘Dead or alive, I am getting into that ring.’ But it was difficult, knowing that four days before the fight I had injured my knee, and one day before the fight my elbow almost came apart, and I couldn’t even lift my left arm, and then in the second round I fractured my hand. I had to struggle a lot, a long, uphill battle, but I thought, ‘I am leaving my heart here, I am leaving my life.’ And I did.”

And he seems ready to do it again, this time taking special care of his injuries through a low-impact training regimen which includes riding a bike. “I already fell twice from that thing, so I have to be careful,” he said.

Martinez used to train on the Oxnard marina using a surf board and a paddle to simply stay afloat and keep his balance, strengthening his knees and ankles in the process, but his legendary fear of water has turned his attention to what he sees as a safer contraption.

“I am also using a sort of skateboard, but attached to the ground, mounted on a single spring axis. [The process is] called proprioception. The strengthening of the muscles is really noticeable.”

Nevertheless, Martinez sees the strengthening of his spirit as the main argument for a victory on June 7.

“Technically, Cotto will probably be my most accomplished opponent, the most capable one. Kelly Pavlik was a great champion, but he didn’t have the intelligence that Miguel Cotto has. Pavlik had a terrific power, but Cotto is more intelligent. He is a true champion and he is dangerous, but if I am in perfect shape, as I am planning to be, I can’t be worried too much. The reasons for me to say, ‘I am here and I am ready to win’ are not only said in reference to my body. They have to do with my recovery from my injuries and my motivation as well.”

Gabriel Sarmiento and his return to Team Martinez

Aside from Dr. Bordon and head trainer Pablo Sarmiento, Martinez’s team is completed by Canadian hand-wrapping specialist Russ Anber (coming back after a two-year hiatus, during which Maravilla hurt his hands severely in his fights against Julio Cesar Chávez Jr. and Murray) and occasionally joined by Dr. Roger Anderson, his usual physician whenever he is in Oxnard.

But the big news this time is his reconciliation with former longtime trainer Gabriel Sarmiento, which is something once considered almost impossible.

“It is positive, because together we did great things together. The ‘house is back in order,’ and that’s essential. I need tranquility. Both for my work and for my personal life. And there’s nothing better than reaching an agreement between all of us. We found a common ground, and from there on we are moving forward. We are looking at the Cotto fight without looking back, like the professionals that we are, above all.”

Although they both managed to iron out their differences, a probation period still in effect in Spain will prevent Sarmiento from traveling to the U.S. for this fight. But he has been an essential part of the team during the Madrid leg of the training camp. And Martinez feels this is a reason for celebration.

“We got together, had coffee, and a conversation, shook hands, and then we agreed to start working on the next day at 6 in the morning. And we were working as hard as usual. Training with Gaby is super tough, it’s wild. He is still crazy about his work, and that’s great. I have a guy next to me that is committed 24 hours to his job, and since I am the same kind of person, as crazily dedicated as him, then we’re fine. When we’re not working out, we’re resting to start working out again at the gym. We’re very much alike.”