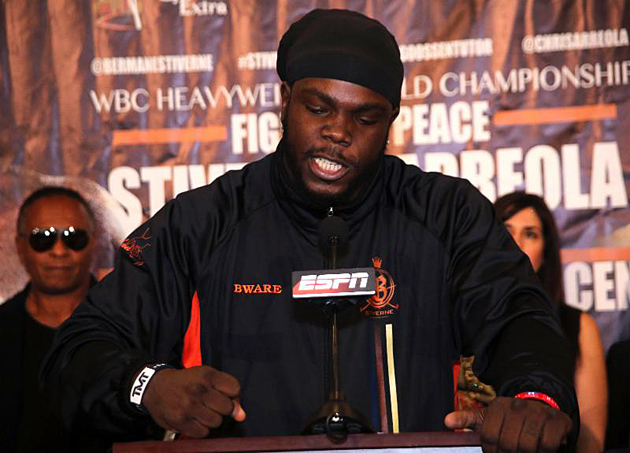 LOS ANGELES — Bermane Stiverne became the first major heavyweight titleholder from Haiti with a sixth-round stoppage of Chris Arreola on Saturday at the Galen Center on USC's campus. Stiverne, who won the WBC title that was vacated by Vitali Klitschko, dropped Arreola twice in Round 6 before the fight was stopped.

Arreola (35-4, 31 knockouts) looked like he was fighting demons after the first solid punch that Stiverne landed in the opening round of tonight's rematch. Stiverne dropped him hard in the third round of their first bout last April, breaking the Southern Californian's nose and beating him up en route to a unanimous decision win.

Arreola was thinking about those hard shots as Stiverne rocked and buzzed him again with fast and accurate power punches. However, Arreola looked like he fought past those demons by rocking his nemesis with hooks in Rounds 2, 3 and 4, ignoring Stiverne's taunts while doing so.

However, Stiverne (24-1-1, 21 KOs) remained a live demon right in front of him, countering well and going to the body even when he was being pressed to the ropes. Arreola was unable to defend against Stiverne's superior speed and ultimately he was unable to deal with the Haitian's power. Stiverne scrambled and dropped Arreola with a big right to the temple mid-way through Round 6. Though Arreola got up, he was not able to recover. Stiverne dropped him again and Arreola got up on instinct alone. Referee Jack Reiss did the wise thing and stopped the bout at 2:02 of the round.

Prior to the stoppage, the two contenders gave the modest crowd in the Galen Center and those watching live on ESPN a quality heavyweight scrap.

A full ringside report by Michael Rosnehtal will be posted shortly.