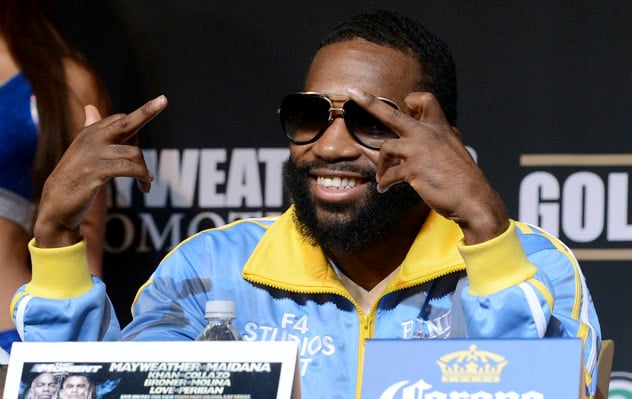 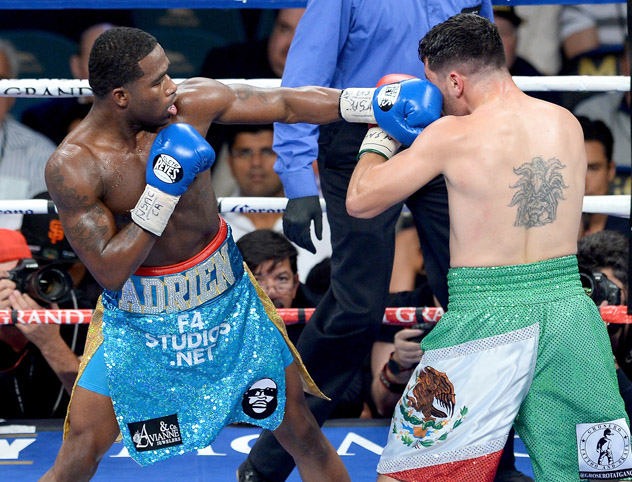 Adrien Broner (L) against Carlos Molina on May 3, 2014. Photo by Ethan Miller/Getty Images

Following Adrien Broner’s comments during a post-fight interview on May 3, the WBC has suspended him until he makes an apology.

Broner (28-1, 22 KOs) had just beaten Carlos Molina in his junior welterweight debut on the Floyd Mayweather Jr.-Marcos Maidana undercard in Las Vegas and was being interviewed in the ring by Showtime’s Jim Gray. “I’ve beaten Afri-CANs and I just beat the f— out of a Mexi-CAN,” said Broner.

Along with many present in the crowd who loudly booed Broner’s words, Golden Boy CEO Richard Schaefer was among those who found the comment objectionable. Asked whether he believes Broner crossed a line, he said, “Yes, I do believe that to be the case.”

“I think that sometimes he says stuff without really thinking,” said Schaefer. “But as I got into the ring, the first thing that he said to me was, ‘I’m so sorry that I said what I said.’ … He rubs a lot of people the wrong way. But I do think that there is sort of a line, and that that line has been crossed.”

The WBC issued the following statement:

Adrien Broner, a former WBC lightweight champion, has offended many people around the world with his words during his post-fight interview after his fight against Carlos Molina.

The World Boxing Council holds human equality as its banner and will not accept a former WBC champion to make racially offensive statements.

Since words can be interpreted in different ways, the WBC is issuing this open letter to Mr. Broner to either clarify his statement, or to issue a public apology if those words were intended to be disrespectful and offensive.

Mr. Broner is hereby suspended from participating in any WBC-sanctioned championships, and will be excluded from the WBC ratings until he makes a public apology satisfactory to the public of the world.

Boxing is a great sport. It is a world sport, and boxers should be honorable and exemplary members of the community. Fair play and human equality must always be upheld.