About 50 injured in stampede at MGM after Mayweather-Maidana fight 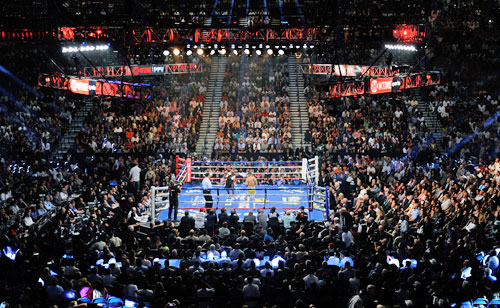 Twenty-four were taken to Las Vegas-area hospitals, The Las Vegas Review Journal reported. The MGM Grand Garden Arena was filled to its capacity of 16,268.

"All is safe at the MGM Grand. Last night security responded promptly to crowd excitement to ensure guest safety. … Following Saturday’s boxing event at the MGM Grand Garden, guests exiting the arena were startled by a loud noise, sending many rushing to clear the area.

"MGM Grand Security & Metro Police who were already on the scene responded quickly to assist. Our staff continues to assist guests and take reports regarding the incident. We are investigating the situation thoroughly to understand more completely what occurred, assist those affected, and to ensure further safety precautions."

The incident occurred between the arena exit and the hotel's Garden Walk promenade of stores and restaurants, The Sun reported. Clark County Fire Department spokesman John Steinbeck told the newspaper on Sunday morning that emergency personnel arrived on the scene after receiving a call at 10:45 p.m. indicating that someone had been shot near the food court on the walkway leading to the Grand Garden.

"It was later determined that some sort of wall or partition near the Starbucks in the food court fell over, causing a loud bang," according to a Clark County news release, which indicatd that no one had been shot. "This occurred when the crowd from the Mayweather fight was leaving the Grand Garden Arena. The loud bang caused a panic, and multiple people were knocked down and trampled during the panic."

The most serious injury was sustained by a woman in her mid-30s who suffered from a severe cut on her leg, according to Yahoo! Sports. And boxing fan Dulce Castillo said her 6-year-old son, Braulio, was being taken to the hospital after he was trampled.

"I just [felt] like the people [were] over me and I am scared and I am screaming very hard," Castillo told Yahoo! "I said to my brother, 'Help me, help me, please.' My son is with people (on top of him). I thought that we were dying, really."