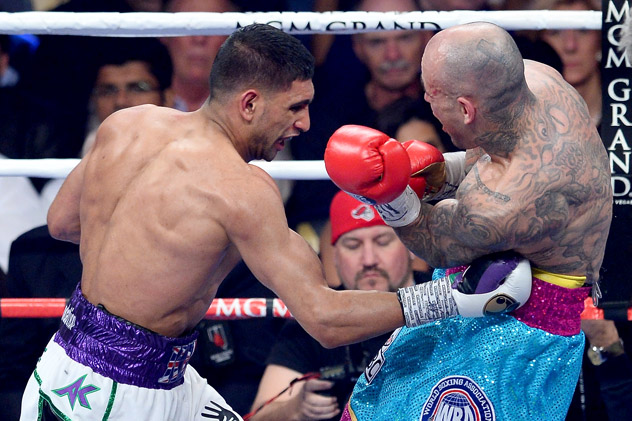 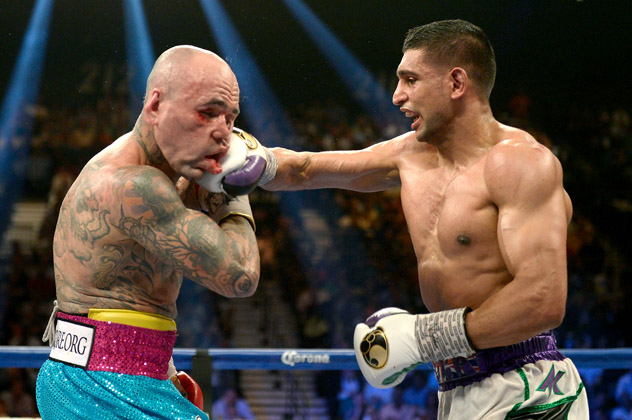 Amir Khan catches Luis Collazo with a right cross en route to outpointing the veteran on May 3, 2014, in Las Vegas, Nev. Photo by Harry How/Getty Images.

Khan (29-3, 19 knockouts), who hadn't fought since struggling against Diaz last April, won by scores of …

Khan may have put himself back in the Mayweather sweepstakes with the dominating victory against a tough and savvy veteran, who had won four bouts in a row, including a second-round KO of Victor Ortiz in February. Khan made effective use of his greater hand speed, longer reach and constant lateral movement.

Collazo (35-6, 18 KOs) tried to compete but he was never able to cut the ring off on Khan and he was throroughly rustrated with the former 140-pound titleholder's holding and pushing tactics.

Collazo, who was dropped once in Round 4 and twice in Rond 10, was penalized one point for low blows by referee Vic Draculich in Round 8. Draculich docked Khan a point for excessive holding later in the same round. The holding and rough stuff often made the fight hard to watch, but Khan was still pleased with his performance.

"It was the first time we spent a long time with my trainer, Virgil Hunter, and he taught me some things," Khan said afterward. "I needed the time away from boxing but I also needed to work on mistakes."

The Bolton, England native believes his talent and tactics would challenge Mayweather.

"Styles make fights and I really believe I have the style to trouble Floyd Mayweather. Collazo has been beaten but it was always a really close fight, against (Shane) Mosley, (Andre) Berto. I beat him convincingly."