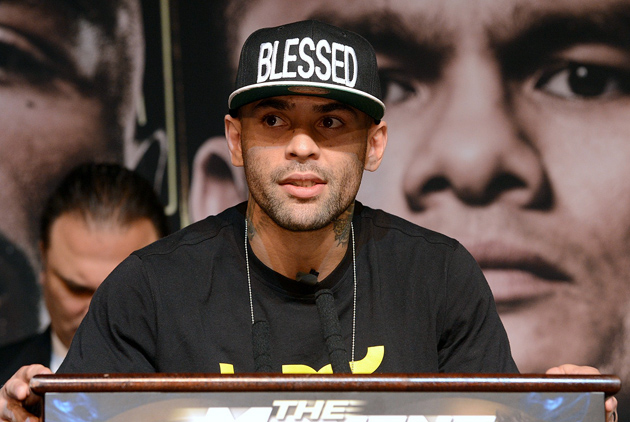 LAS VEGAS – Sometimes you have to go to some really dark places before you can really see the light. If you don’t think so, ask Luis Collazo.

When you lose high profile boxing matches that everyone in the building except the judges believe you won, you can slide into a hole. If you find it difficult to get meaningful matches because opponents think you’re a high-risk/low-reward boxer you sink deeper into that hole. If injuries mount, costing you time in the ring and money in your bank account, it can seem like someone is throwing dirt on you in that hole.

Collazo knows the feeling all too well. Those emotions have taken him to places that he never wants to go again.

“Last year I was at a point where I thought about committing suicide,” Collazo said. “I was at home drinking and I was pulling away from my family, staying away from the gym, and all the people who had embraced me all those years that I was around.”

One night on one of those drunken benders Collazo was so depressed that he made a vow to God.

“I asked God to give me a sign. Help me and take me out of this dark place and I’ll turn my life over to Him,” he said. “The next day I woke up with a different spirit. It was amazing. I just wanted to be around everyone. That hole that I had in my heart it’s filled. It’s complete.”

Collazo knows that some people will scoff at his spiritual awakening. But then he points to the fact that he has won two fights that few people gave him a shot at winning. And now he is sharing a card with Floyd Mayweather Jr., fighting Amir Khan in a 12-round welterweight co-feature, on one of the biggest Showtime pay per view boxing shows of the year at the MGM Grand on Saturday night.

“It’s amazing because I was coming up when Floyd was fighting everybody (and) was watching,” Collazo said. “To be able to fight right before he fights is tremendous. I know everybody who loves boxing is watching.”

It is an incredible platform and opportunity for Collazo, who just a year ago was wondering just how long he would remain in boxing. More amazing is how Collazo’s life and boxing career has turnaround in just a year.

He believes it is all a testament to his decision to embrace his Christian faith.

“Before I was on my time, now I feel like I’m on God’s time,” Collazo said. “I’m just embracing every second and enjoying life. I’m living life the way I should. I’m just a complete person, not only as a fighter but as a person.”

Collazo’s career was treading water after he lost a lopsided decision to Shane Mosley in 2007. Nirmal Lorrick, Collazo’s longtime manager and trainer, said Collazo left that fight with a slew of injuries, including a broken left thumb and injured shoulder. He needed surgery to repair the fractured thumb with three torn ligaments. Lorrick sensed a change in Collazo’s demeanor after that fight, a downward spiral that often left him sullen.

Things were looking up when Collazo got a shot at the WBC welterweight title against Andre Berto. Collazo put on a great performance against Berto, but did not get the decision in a fight that many ringside observers thought he won. It was the second time that he had lost a close decision in a title match. He lost the WBA title on a controversial split decision to Ricky Hatton in 2006.

After that loss to Berto, Collazo didn’t fight at all in 2010, sitting on the shelf waiting for a meaningful match that never arrived. When he returned the next year he lost a 10-round decision to Freddy Hernandez and looked like anything but a welterweight title contender.

By the time he was matched against Alan Sanchez, a promising young welterweight contender on a card at the Cowboys Dance Hall in San Antonio last September, a lot of people thought that Collazo’s career was headed for Boot Hill. But Collazo, who was already embracing his new found faith, wasn’t ready to throw any more dirt on his boxing career.

Collazo put on a boxing clinic against Sanchez, winning a 10-round decision and serving notice that he was fit for bigger fights. Golden Boy Promotions listened to him and offered him a fight against Victor Ortiz at the Barclays Center – a hometown fight for Collazo who was raised in Williamsburg, Brooklyn.

Just like heading into the match against Sanchez many people counted out Collazo before the Ortiz match. The conventional wisdom was that the then 32-year-old, light punching Collazo couldn’t do enough damage against Ortiz to keep him from steamrolling him. But Collazo turned the tables on Ortiz, knocking him out in the second round.

“That night Victor Ortiz looked like an old man,” Collazo said. “You have to have faith in yourself, have faith in God and keep pushing forward. You can overcome any obstacle if you have faith.

As his boxing career has risen from the ashes, his personal life is on the upswing as well. He married his longtime girlfriend, Frances, with whom he has three daughters, in 2013. He also discovered he had another daughter, Tiffany, from a relationship that he had when he was 13 years old. And Tiffany, 20, has two little girls, making Collazo a proud grandfather at the ripe old age of 33.

Collazo is even taking a more positive approach to more downbeat aspects of his personal life. He has two brothers serving prison sentences in Puerto Rico.

“Right now the youngest one is 20 and he’s doing 132 years (for murder) and the other one is 21 and he’s doing 7 years (on a drug conviction),” Collazo said. “I just try to give them encouragement to stay positive and have faith because anything is possible. The one who is doing 132 years, if he keeps his head clear and stays clean and keeps doing positive things in there he’ll be able to come out in maybe 25 years. But hey, that’s better than staying there for 132 years.”

Lorrick has always tried to keep Collazo positive, even when bad things were happening. He likes that Collazo is embracing his new found faith with such fervor.

“Luis has enjoyed life in different ways. He lived that dream of having some money, partying, hanging out,” Lorrick said. “Now he’s into the spiritual part with his family and he’s finding himself. The spiritual thing is to make our life more complete. It’s for us. I think Luis has reached that point in his life where this is making him happy.”

Lorrick said the real test of Collazo’s faith will come after the fight against Khan.

“If you win, it’s good. If you lose, how do you handle that?” he said. “That’s something he’s really got to think about. If you want the faith to keep going on you have to believe in yourself. You have to believe that you’re going to knock this guy out. That he’s going to win. He’s always said that he’s the guy who should be in with Floyd. Well he’s going to get his opportunity.”

Collazo wouldn’t change anything about his life up to this moment. He looks back and toward the future philosophically.

“I use every negative and turn it into a positive,” he said. “We’re supposed to go through trials and tribulations. That’s what creates our nature, our personality. It gives us wisdom and character. I’m just learning that now that I’m 33. I’m learning that more and more as I get older.”