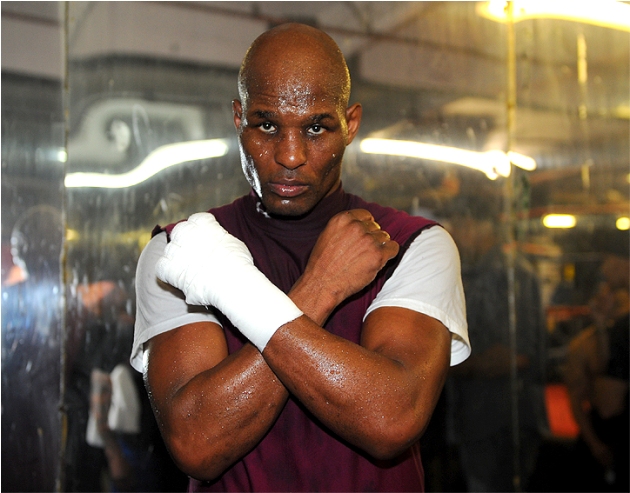 Although the 49-year-old Hopkins (55-6-2, 32 knockouts) was ordered by the organization on Wednesday to face the winner of a June 21 fight between Anatoliy Dudchenko and Nadjib Mohammedi, IBF President Daryl Peoples informed RingTV.com that a rule is in place for Hopkins to take a unification bout against RING and WBC champion Adonis Stevenson should Stevenson get beyond a May 24 defense against Andrzej Fonfara.

"In the IBF, a unification takes precedence over the mandatory," said Peoples. "Bernard's been ordered to commence negotiations. He is the champion. He can ask to unify the titles without requesting an exception."

Already the oldest man to win a significant belt, doing so twice at the age of 46 and 48, respectively, Hopkins became the oldest fighter to unify titles with a unanimous decision over 30-year-old Beibut Shumenov, whom he dropped in the 11th round on April 19 in Washington, D.C.

Hopkins has designs on a bout with Stevenson for later this year — something Golden Boy Promotions CEO Richard Schaefer informed RingTV.com that he knew was within IBF rules — and beyond that, perhaps a fight with the WBO's titleholder Sergey Kovalev, Dudchenko's promotional stablemate with Main Events.

Hopkins spoke to RingTV.com on Wednesday while in attendance at the final press conference for Saturday's welterweight fight between RING and WBC champion Floyd Mayweather Jr. and WBA counterpart Marcos Maidana at the MGM Grand on Showtime Pay-Per-View.

"We all have mandatories when we get the belt. But when you get to those situations where there are unifications in a division in the world of boxing where you rarely see unifications, it's a no-brainer," said Hopkins. "You have to really be a moron to try to go against that when the bigger picture is one division, one champion."

It was back on April 29, 1995, nearly 19 years ago to the day, when Hopkins stopped Segundo Mercado in the seventh round to win the IBF's vacant middleweight title. Theirs represented a rematch of a December 1994 draw during which Hopkins was dropped in the fifth and seventh rounds.

Hopkins went on to become the undisputed 160-pound champion over the course of a division-record 20 title defenses before being dethroned in a split decision loss to Jermain Taylor in July 2005.

"They understand. Every now and then, when you get to have a flashback to yesterday, then you should be able to take advantage of it. At the end of the day, it's what's good for the game itself."

A hard-hitting 35-year-old Ukrainian nicknamed "The Gladiator," Dudchenko (19-2-1, 13 KOs) will face Mohammedi (34-3, 20 KOs) at the Mohegan Sun in their IBF eliminator at Pocono Downs in Wilkes-Barre, Pa., on NBC Sports Network's Fight Night.

But it appears Hopkins will get his way if he wants to face Stevenson instead of the winner between Dudchenko and Mohammedi.

"As soon as their fight is over, he'll be ordered to begin negotiations," said Peoples, "but he can ask to unify the titles and that would take precedence over his mandatory."