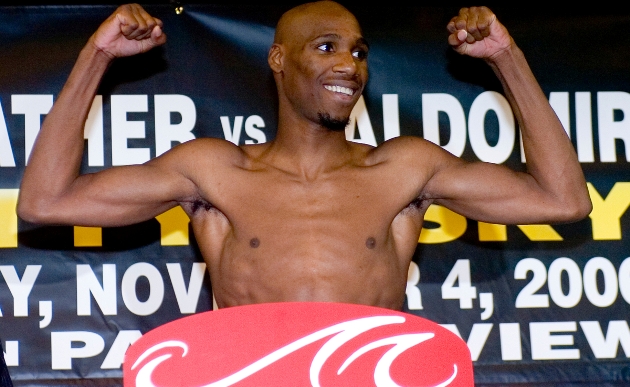 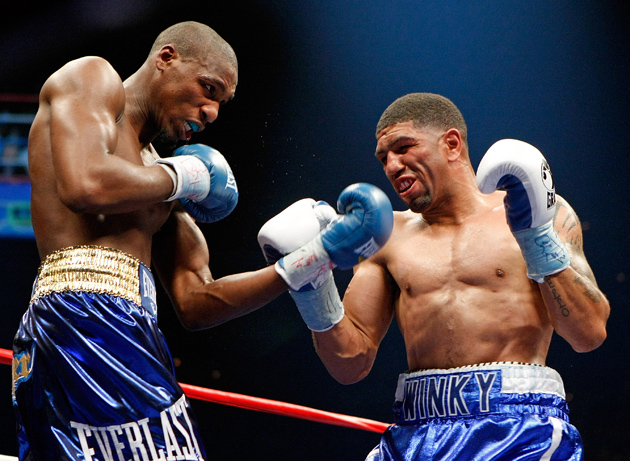 Paul Williams (left) and Winky Wright trade blows in the fourth round of their middleweight bout at the Mandalay Bay Events Center on April 11, 2009 in Las Vegas, Nev. Williams won by unanimous decision. Photo by Ethan Miller/Getty Images

Paul Williams was involved in a career-ending, life-altering motorcycle accident on the morning of May 27, 2012. The former two-time welterweight titleholder was thrown from his bike, landed on his back, and was left paralyzed from the waist down.

Williams, who was scheduled to fight Canelo Alvarez in September of 2012, saw his career – which included impressive victories at welterweight, junior middleweight and middleweight – come to an abrupt end.

However, Williams, who will receive the Boxing Writers Association of America's Bill Crawford Award for “Courage in Overcoming Adversity” at the annual BWAA award dinner on Thursday in Las Vegas, hasn’t allowed his spirit to be broken by the tragic accident.

“My mindset is still the same as when I was fighting,” the humble Georgia native told RingTV.com. “When I lost my first fight, that’s the way the cooking crumbles. When I got knocked out, the same. So when I got hurt on the bike, I look at it the same way. If I’d been in a car, what I gonna do, be scared to get in the car again? That’s the way the cookie crumbles.

“So I can’t get mad about it and be all depressed (because) I can’t walk and do stuff (the way) I used to do, then I’ve got two problems: I’m mad and upset. I can’t deal with that.”

Closing on two years after the accident, Williams appears to be in a good place. “The Punisher” saved much of his ring earnings, ploughing the money into real estate and property.

“A lot of fighters don’t save their money, the money comes and goes,” he said. “I don’t have my share of millions but walking around with a hundred thousand in your pocket (makes) you feel good. You can buy cars. My manager was like ‘You want asset, not liability.’ So I started to buy property. Fortunately, when it came (the accident) I was able to fall back on my property and that’s what I’m doing right now. I’m not The Punisher no more, I’m The Landlord (laughs).”

Williams remains very active, sometimes heading to the gym where he hits the heavy bag. Recently, he’s even done some deer hunting.

As a boxer Williams, who finished his career with a 41-2 (27 knockouts) record, will long be remembered for his old-school, warrior mentality that saw him look to challenge himself against the very best from 147 to 160 pounds.

Now 32 years old, Williams lives with his fiancée and their three children. He graciously took time from his schedule to speak with RingTV.com for the “Best I Faced” series.

Best Overall – Sergio Martinez – I’d say (Sergio) Martinez because he was the only one who could knock me out! Basically, it wasn’t anything special what he did in the ring. He was more an elusive fighter, a fighter that’s on the run all the time, jumping in and jumping out.

Best Boxer – Terrence Cauthen – I would say probably Terrence Cauthen. That was like my first time fighting a boxer that was ranked. It was an experience. A lot of fighters don’t know how to deal with a fighter who’s ranked if it’s your first fight (at that level). He’s doing a lot of slick boxing stuff.

Best Defense – Really I can’t say nobody ‘cause I’m getting through their defense. I’m gonna keep throwing! I really can’t say.

Best Chin – Antonio Margarito – He had a solid chin that night.

Best Puncher – Walter Matthysse – That was the first time when I got hit, my whole body felt numb. The crowd went real low (to me). I was like “Wow.” I moved around and could hear the crowd getting loud(er) and my body getting back (to) regular.

With Martinez, he was a fighter who I take my hat off to. He was the only one who beat me (like that). I respect him. The first fight was a war. The first couple of rounds I was losing but I had to adapt. It was a straight dog fight. I tried to make the second fight the same way but it didn’t happen that way.

Fastest Hands – I never really caught on to it like that, who had the fastest hands. I fought a couple of guys who had faster hands than Martinez. Martinez was a mover, he’d jump in jump out but I fought fighters who stood in front of you and they’d punch with you, like (Erislandy) Lara, he had fast hands. With that fight I want to get that stuff straight. I allowed that stuff to happen, for me coming back from getting knocked out. I wanted to see whether I was gonna be a gunshy fighter or would I be able to still go out and get hit like I did before. That was my mindset, I’m gonna go and fight like I always did. He hit me with the punches, and people said “You got hit with punches you shouldn’t of,” but in my eyes nothing happened.

Fastest Feet – Erislandy Lara and Sergio Martinez – They both in the same boat, it’s a tie with the fastest feet. I don’t like those runners.

Smartest – Verno Phillips – He knew when to get out, he knew he had no more in the tank left so why go out there and push the issue and fight this younger guy. He knew it was a dangerous move. Some punches he would throw and stuff, and some of the stuff he was saying, I was catching on to. I could see it was like basically he was trying to coach you while fighting you.

Strongest – Antonio Margarito – His punches, they were like a solid thump. Every punch he hit you with was a solid thump, you’re gonna feel it.