RING contributors to pick up awards at BWAA dinner on Thursday 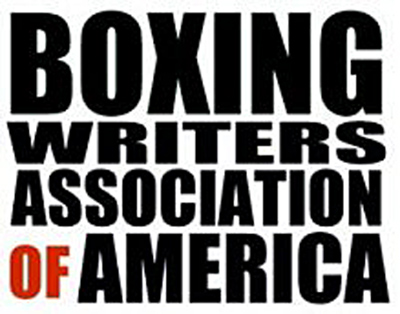 THE RING's own Ron Borges, Lee Groves and Gordon Marino will be among the Bernie Award winners who are scheduled to attend the 89th annual Boxing Writers Association of America's awards dinner, which will take place Thursday at the MGM Grand Hotel and Casino in Las Vegas.

Naoki Fukuda, a frequent photographer for THE RING and RingTV.com, won a first place award for his shot of cruiserweight Anthony Ferrante celebrating his victory over Isa Akberbayev on Jan. 19, 2013. The photo was voted the best of the Feature Photo category. Fukuda also got an honorable mention in the Action Photo category for his shot of a bloody Gabriel Rosado having his face distorted by a punch from Gennady Golovkin, also on Jan. 19.

Borges, who has never failed to place in the 13-year-old writing competition renamed for Hall of Fame scribe Bernard Fernandez, earned four honors. He scored a third-place in Feature Over 1,750 Words for his story in THE RING entitled "Little Warriors," which chronicled the struggles experienced by boxer Edwin Rodriguez's two "micropreemie" children who weighed just 19 ounces at birth. The veteran writer also won a first in News Story for "Fists of Gold" that ran in Boxing Monthly and honorable mentions in Event Coverage and Column that were published in the Boston Herald.

Groves tied Sports Illustrated's Chris Mannix for first in Feature Under 1,750 Words for "Commentary: One Boxing's Fan's Crisis of Confidence," an article posted on RingTV.com that linked Francisco Leal's death and Magomed Abdusalamov's post-fight struggle for life with his own doubts as a boxing fan that took place several years earlier. He was ringside when Oscar Diaz suffered life-threatening (and career-ending) injuries following his 11th round knockout defeat to Delvin Rodriguez in July 2008 and the article described his conflicts as well as how he resolved them. Groves, whose first-place award is his second in the last three years, also earned a third-place tie in News Story for his tribute to Ken Norton following the onetime heavyweight titlist's death in September 2013.

Other award winners for THE RING and RingTV.com include RING editor-in-chief Michael Rosenthal (honorable mention in Event Coverage), Joseph Santoliquito (honorable mentions in Event Coverage and Feature Under 1,750 words), Norm Frauenheim (third for Event Coverage for "Mayweather Wins Big According to Everyone But One Judge" for 15Rounds.com and an honorable mention in Feature Over 1,750 Words for THE RING) and Bart Barry, who captured a third in Investigative Reporting for "Frankie Leal: Death and a Haunting Question" that appeared in the THE RING and a third-place tie with Groves in Boxing News Story with a 15Rounds.com article entitled "Un-Cancelled: Garcia Misses Weight, Lopez Does Not."

The dinner also will honor the following boxing luminaries:

* Floyd Mayweather Jr. – The Sugar Ray Robinson Award for Fighter of the Year

* Freddie Roach – The Eddie Futch Award for Trainer of the Year

* Al Haymon – The Cus D'Amato Award for Manager of the Year

* John Sheppard – The James A. Farley Award for Honesty and Integrity in Boxing

The event will begin at 6:00 p.m. with cocktails while the dinner and awards ceremony is scheduled to start at 7:30 p.m.