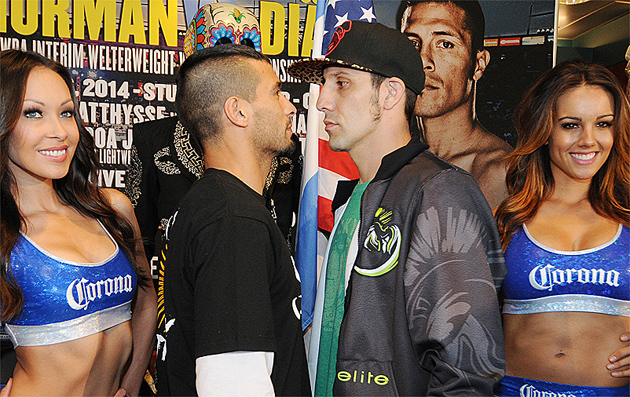 RingTV.com has a live round-by-round updates of tonight's clash during which THE RING's No. 1-rated junior welterweight Lucas Matthysse rose from knockdowns in each of the second and fifth rounds to score three knockdowns of his own on the way to an 11th-roundl knockout over John Molina at the StubHub Center in Carson, Calif.

Matthysse dropped Molina once eachin the eighth, 10th and final rounds, the last time, for good as referee Pat Russell waved an end to the fight 22 seconds into the 11th. Matthysse had an overall advantage in total punches, 276-to-104, power shots, 204-to-86, and, jabs, 71-18.

Matthysse (35-3, 33 knockouts), a 31-year-old puncher from Argentina, was last in the ring last September when he was dropped in the 11th round of a unanimous decision loss to unbeaten RING junior welterweight champ Garcia. Matthysse's right eye was nearly closed shut by the end of the 12-round fight.

Molina (27-4, 22 KOs), meanwhile, is 3-3 with three knockouts in his past six bouts, the first of which was a first-round stoppage loss to former titleholder Antonio DeMarco in September 2012.

Molina split his next two bouts, stopping Dannie Williams in the first round last January before falling by majority decision to Andrey Klimov in June.

A 31-year-old Southern Californian, Molina had knocked out his previous two opponents, coming from behind to stop previously unbeaten Mickey Bey in the 10th round last July, and knocking out Jorge Pimentel in the second round last November.

Matthysse has a 4-3 record, with four knockouts against six current or former titleholders, having floored all of them. Prior to facing Garcia, Matthysse scored three knockdowns during a third-round stoppage of IBF 140-pound beltholder Lamont Peterson last May for his sixth straight knockout victory in a non-title bout.

Promoted by Golden Boy Promotions and advised by Al Haymon, Matthysse said that he expects to fight two or three more times at 140 before rising into the welterweight division.

Round 3. Matthysse starts out as he did in the two previous rounds, landing to the had and body. Molina appears to be waiting for the opportunity for another big punch. Jab, jab and right by Matthysse. Clinch. Left and a right by Molina. Referee Pat Russell signals a clash of heads. MATTHYSSE BLEEDING PROFUSELY FROM THE LEFT EYE. Dr. allows the fight to contine. Big trouble for Matthysse. Matthysse's coming with both hands. Matthysse's trying to land, but can seem to land cleanly. Jab by Matthysse. Jab, jab right by Molina. Matthysse, 10-9; Molina, 29-27.

11. Referee and doctor appeared close to stopping the fight between rounds. Molina takes a hard right. MOLINA GOES DOWN FROM A HARD RIGHT, LEFT, RIGHT. ARMS AT HIS SIDE. HE'S DONE!!!!