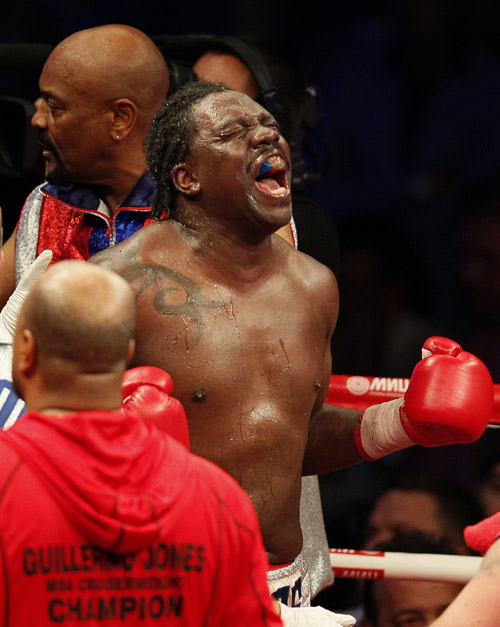 Just hours before the highly anticipated Denis Lebedev-Guillermo Jones rematch in Moscow, news broke that Jones had tested positive for the banned substance Furosemide, the same substance that he came up dirty on for the first fight. The fight was called off as a result.

Initially, both teams spoke about the two meeting in a non-title fight, but the promoter of the card decided not to hold the bout.

"After discussing with promoter of the event Andreyv Rabysnki, Jones v. Lebedev has been called off following @NewsWba order," wrote WBA President Gilberto Mendoza on his Twitter account. "At this point, Guillermo Jones fate is on sample 'B.' His representative must challenge the findings by Swiss lab."

Jones “A” sample had tested positive with Swiss Laboratory for Doping Analyses (LAD), a neutral lab.

The two cruiserweights had waged war last May in one of the best fights of 2013. Though Lebedev (25-2, 19 knockouts) was ahead on all three scorecards 96-94 (twice) and 97-93, he suffered several facial lacerations that resulted in a five day stay in hospital.

Leading into the highly anticipated rematch there was bad blood between both fighters. Jones had dubbed the second fight “Facial Surgery II," but in an exclusive interview with RingTV.com Lebedev had refused to take the bait.

“Only my victory is on my mind, nothing else!” said Lebedev.

Though it is still early it must leave the chronically inactive Jones (39-3-2, 31 KO's) career in a very precarious position.