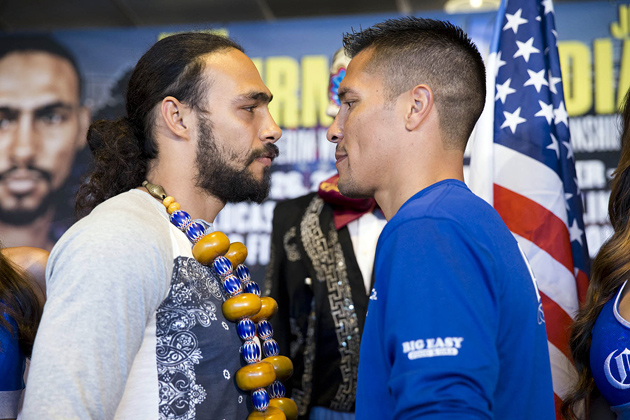 Keith Thurman and Julio Diaz made weight for their scheduled 12-round welterweight bout that tops a Showtime tripleheader on Saturday at StubHub Center in Carson, Calif. Thurman weighed 145.5 pounds. Diaz weighed 146.75. Lucas Matthysse weighed 140 pounds for his co-featured bout against John Molina, who weighed 139.75 pounds.

WBC lightweight beltholder Omar Figueroa Jr. made weight for his first title defense against amateur rival Jerry Belomtes, which opens the Showtime Championship Boxing broadcast. Both Figueroa and Belmontes weighed in at 134.75 pounds.

The weigh-in took place on Friday afternoon at the Biltmore Hotel in downtown Los Angeles.

"I hope he's well rested for this fight because if not he's going to get his rest during the fight," said Thurman (22-0, 20 knockouts), who has the heightest KO percentage among world-rated welterweigts.

"He has this reputation, everybody fears him, but not me," said Diaz, a two-time lightweight titleholder who has matured into a solid welterweight gatekeeper in recent years. "He chose the wrong boy today."