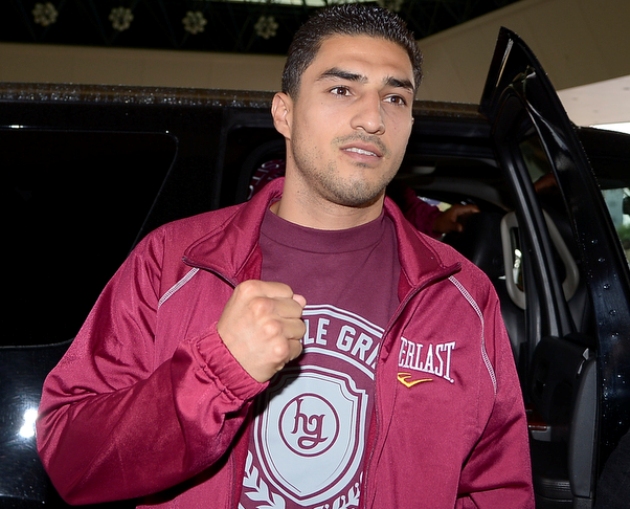 Josesito Lopez had heard it all leading into his fight against Aron Martinez on Thursday night.

"He didn't impress in his last fight."

"He has had too many wars."

While Lopez handled the criticism in subsequent interviews very well, he was eager to prove he is still an top fighter, one poised to make a run a world title.

After a slow start against Martinez, Lopez proved that he can dictate a fight, even hurt his opponent. The only thing about the fight that garnered most of the attention though was what happened at the end of the fight, which had a peculiar and unusual outcome.

Lopez stopped Martinez in the fifth round at the Agua Caliente Casino Resort and Spa in Rancho Mirage, Calif. The bout headlined a Friday Night Fights telecast.

It is no secret Lopez has fought a murderer's row of fighters in the last two years. Hard-fought fights against the likes of Marcos Maidana, Jessie Vargas, "Canelo" Alvarez, and Victor Ortiz may have taken a toll because of the punishment he has sustained in those fights.

Than again, he has also earned the respect and admiration of boxing fans. He has also affectionately earned the nickname "Riverside Rocky."

In his last bout on Dec. 13 in Indio, Calif., Lopez won an eight round technical decision over Mike Arnaoutis, a fight where he struggled to look against the southpaw fighter. Lopez even suffered a flash knockdown in the third round at the hands of Arnaoutis.

His fight against Aron Martinez was finally taking place after a few postponements, mostly due to injuries Lopez suffered in training camp last year.

Both fighters worked from the middle of the ring from the opening bell. Lopez was more active, trying to set up his combinations behind a jab. Martinez pressed forward, bobbing and weaving his way in, making Lopez miss at times with hooks and counters.

Lopez was beginning to walk Martinez down, attacking the body more consistently. Martinez had his best round in the fourth, where Lopez did little to follow up what he had down in the first three rounds.

Lopez stepped up the aggression in the fifth round. He picked up his punch output, allowing him to put Martinez on the defensive.

About a minute into the fifth round, Lopez landed a left hook to Martinez's body, backing him up against the ropes. Moments later, Lopez landed a left hook to the head that stunned Martinez. Rather than tie up or take a knee, Martinez shockingly turned his back to Lopez, instead facing the padding in the corner. With no hesitation, Referee Jack Reiss stepped in and stopped the bout at 1:19.

Martinez protested the stoppage to Reiss, but under California Athletic Commission rules, when a fighter turns his back to a fighter, he abandons a fight and the referee is obligated to stop the fight.

"You abandoned the fight," Reiss repeatedly told Martinez moments after the fight.

For Lopez, he hopes the victory will translate to bigger fights, where he is even eyeing an opportunity at a world title.
"I thought he (Martinez) was hurt and it was nice that the fight was called short," said Lopez after the fight. "My goal is that I'm going for that world title. I'm training like an elite fighter."

Light heavyweight Thomas Williams stopped former contender Enrique Ornelas in the third round.
In Williams' last fight on January 24, he stopped Cornelius White in the first round, but not before tasting the canvas himself in the fight. Even though Ornelas had won five his previous seven bouts prior to the Williams fight, he was no where near the fighter he once was.

Ornelas looked slower and was hit repeatedly from the opening bell by Williams. He was able to land an occasional right to the head of Williams, but his punches seemed to have little behind them.

With about a minute left in the round, Williams threw and landed a sweeping left cross that dropped Ornelas to the canvas. Ornelas got up and fought on.

In the third round, Williams kept Ornelas at the end of his punches, not allowing him to get inside his guard. It paid off as Williams stunned Ornelas with a left cross. Moments later, Williams landed two right hooks and followed it up with a left cross, dropping Ornelas to the canvas. Ornelas struggled to get up, but to his benefit, referee Raul Caiz, Jr. stepped in and stopped the bout at 2:48. Williams, from Fort Washington, Md., goes to 17-0, 12 KOs. Ornelas, now residing in La Habra, Calif., falls to 34-9, 22 KOs.

In a swing bout, super middleweight Immanuwel Aleem knocked out overmatched Mike Noriega in the second round.
Aleem was too fast and too strong for the much-smaller Noriega. Aleem seemed to stun Noriega with a hook or cross during the first round. Noriega landed an occasional punch, but it did little to Aleem.

It was a repeat in the second round, as Aleem landed at will. Noriega stood his ground more, but a knockdown seemed inevitable as Noriega exchanged with Aleem. With over a minute left in the round, Aleem hurt Noriega and backed him up against the ropes. Aleem followed up and rather than see Noriega hit with too many successive punches, referee Raul Caiz, Jr. stepped in and stopped the bout at 2:04.

Aleem, from Richmond, Va., goes to 8-0, 4 KOs. Noriega, from Imperial, Calif., drops to 4-3, 4 KOs. He has lost his last three fights after winning his first four bouts of his career.