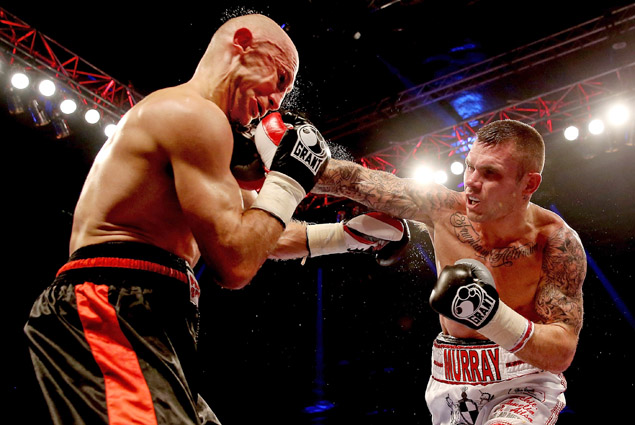 Junior welterweights Willie Limond and Curtis Woodhouse will both be after their fourth consecutive victories when they meet on June 27 at the Braehead Arena in Glasgow, Scotland, as part of a card headlined by former WBO 135-pound titleholder Ricky Burns against an opponent to be named, televised on Sky Sports, Matchroom Sport has announced.

The 31-year-old Burns (36-3-1, 11 KOs) was dethroned following a unanimous decision loss to unbeaten Terence Crawford last month, ending a run during in which Burns went 21-1-1 with eight knockouts.

"I'm over the moon to make this fight for our big Glasgow show on June 27," said promoter Eddie Hearn. "Many witnessed Curtis' Cinderella story when he captured the British title in Hull and now he has the chance to add the Commonwealth strap to his trophy cabinet. But he has a tough task in Willie Limond's backyard."

"I’m thrilled to be getting the opportunity to fight for the British title again. I have boxed poorly in my first two attempts and lost to the better men in Alex [Arthur in July 2003] and Anthony but I didn’t turn up on either occasion and failed to do myself justice. I feel like I have something to prove and I will train like an animal to get into the best shape possible for June 27," said Limond.

"I don't know Curtis personally but I like the way he goes about his business. He's completely dedicated and he comes to fight and that means this is going to be a great night for the fans. Since all the rumors have started about Curtis and me fighting, I have had so many requests for tickets. I think I could sell 1,000 just from my front door. It's going to be a fantastic atmosphere in Glasgow, and we'll serve up a fight that those watching will love."

The 34-year-old Woodhouse (22-6, 13 KOs) suffered his last loss by fourth-round technical knockout to Derry Matthews in September and is coming off February's split decision win over Darren Hamilton.

Woodhouse was set to retire after his win over Hamilton before the opportunity surfaced to fight Limond.

"It’s a real honor to be going to Scotland to put my British title on the line against Willie and challenge for his Commonwealth crown. Willie is a fighter who I have a lot of respect for. He's been there, seen it and done it and I hope to give the Scottish fans a night they won't forget," said Woodhouse.

"The fans up there always really get behind their own fighters but by the end of the fight, I hope to earn their respect. This is a proper 50/50 fight. Willie and I deserve respect for putting both our belts on the line. Its winner takes all and may the best man win."

Murray, who floored Martinez in the eighth round, is coming off a sixth-round stoppage of Ishmael Tetteh last April. Bursak, 29, is attempting to rebound from a unanimous decision loss to Jarrod Fletcher in February.

In another bout on the card, 25-year-old RING number one-rated strawweight Hekkie Budler (25-1, 8 KOs) of South Africa will defend his WBA title against 32-year-old Pigmy Kokietgym (55-6-2, 22 KOs), who is in pursuit of his 11th consecutive win since falling by split-decision to Kwanthai Sithmorseng in November 2010.

Budler is coming off last month's first-round stoppage of Karluis Diaz for his title and Pigmy, a decision over Jimmy Masangkay in February.

Having gone unbeaten since losing his professional debut by by first round knockout to Khayeni Hlungwane in June 2008, Makabu will be after his third consecutive stoppage win and was last in the ring for a second round knockout of Ruben Angel Mino in February.

Masternak is after his third straight win since falling by 11th-round knockout to Grigory Drozd in October and is coming off a unanimous decision victory over Stjepan Vugdelija this month.

In a stunner, Kyrgyzstan's light-hitting Timur Shailezov ended a more than one-year ring absence as well as a five-fight losing streak with Thursday's third round knockout of previously unbeaten Philadelphia bantamweight Miguel Cartagena in the co-main event at the Sands Casino Resort in Bethlehem, Pa. on a card promoted by Mike Tyson's Iron Mike Productions.

A 34-year-old southpaw, Shailezov (17-7-1, 4 KOs) had been knocked out in three of his previous five bouts and had last been in action during a split-decision loss to Luis Yanez on April 19, 2013. The 21-year-old Cartagena (12-1, 5 KOs) was after his third consecutive stoppage win, having last been in the ring for last month's second-round knockout of Miguel Robles.

Shailezov dropped Cartagena once and damaged his opponent's nose so severely that Cartegena's corner requested the fight be halted.