Can Marcos Maidana beat Floyd Mayweather Jr. like he did Adrien Broner? 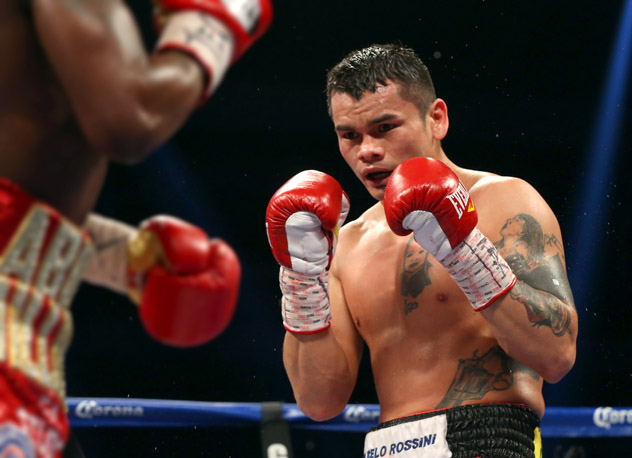 Floyd Mayweather Jr. is THE RING's number one-ranked fighter, pound-for-pound. The 37-year-old is also THE RING, WBA and WBC 154-pound champion who is looking to add Marcos Maidana's WBA 147-pound belt to the RING and WBC championships he already owns in that division.

But if you tell any of that to Maidana, the words go in one ear, pick up speed and go right out of the other.

"The last thing that I’m worried about is anyone's title. I want to just train and beat Mayweather," said Maidana, 30, during a recent national conference call with media members. "I am a champion and I am ready to fight for my title. Most importantly, I am preparing to beat Mayweather."

Mayweather (45-0, 26 knockouts) will face Maidana (35-3, 31 KOs) in a Showtime Pay-Per-View main event on May 3 at the MGM Grand in Mayweather's residence of Las Vegas, where the hard-hitting Argentine believes he can perform similarly to his unanimous decision over Mayweather protege Adrien Broner last December.

In fact, Maidana appears to be confident of this.

"I already beat Broner the way I did," said Maidana, "and I think I can do the same with Mayweather."

Maidana scored knockdowns in the second and eighth rounds to earn the WBA belt from Broner, a man he considers to be similar in style to Mayweather. In victory, Maidana won for the fourth straight time as a welterweight during a run that has included three knockouts under new trainer Robert Garcia.

"Now that I've been working with Robert Garcia, I feel much better," said Maidana, whose last loss was by unanimous decision to southpaw Devon Alexander in his 147-pound debut in February 2012.

"My punches are connecting even stronger now because the punches are being thrown in a better location and with precision. I feel a lot better. I feel much, much better now that I’ve been working with Robert Garcia. I'm fighting and beating great fighters."