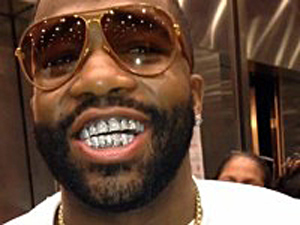 WASHINGTON, D.C. — Three-division titlewinner Adrien Broner may have been flashing a full beard as well as silver grillz on his teeth that matched the glittering watch on his wrist, but he also expressed humility after having been dethroned as WBA welterweight titleholder by Marcos Maidana in December.

Speaking to a cluster of reporters at The D.C. Armory, where he was in attendance for Saturday night's unanimous decision by Bernard Hopkins over Beibut Shumenov on Showtime, the 24-year-old Broner (27-1, 22 knockouts) said that he would like to become a four-division titlewinner by capturing a 140-pound belt, and that he would eventually like a rematch with Maidana, even as he called the loss "the best thing that ever happened to my career."

In preparation for his May 3 junior welterweight fight against Carlos Molina on the undercard of Floyd Mayweather's RING and WBC defense against Maidana, Broner said that he has spent his past few months training at the Washington, D.C.-area gym of IBF 140-pound titleholder Lamont Peterson, with whom he has often sparred.

Before losing to Maidana, Broner had earned title belts over three weight classes, taking the WBO's junior lightweight belt by third-round knockout over Vicente Martin Rodriguez in November 2011, and the WBC's lightweight title following an eighth-round stoppage of Antonio DeMarco in November 2012.

In his previous bout in June 2013, Broner jumped two weight divisions for his 147-pound debut with a split-decision victory that dethroned Paulie "The Magic Man" Malignaggi for the division's WBA's belt.

"I will be going into history when I'm done with boxing. I wasn't going to say this, but since I am being ambushed and crowded by so many great-looking reporters, I'm going to let you know that I will be trying to make history," said Broner.

"I don't know if it's been done before, but I'm going to have to tell you. I'm going to be a four-time world champion in four different weight classes at the age of 24. I'm trying to do that."

Against Maidana, Broner was floored once each in the second and eighth rounds.

"Losing that fight was definitely the best thing that ever happened to my career," said Broner. "Just think, if Adrien Broner didn't lose that fight, if you think that I'm a jackass now, what would I have been then. Who knows what the future holds, but I want to thank the Lord for giving me that wakeup call."

Broner said he has no problem fighting on the Mayweather undercard.

"At the end of the day, what the f–k am I supposed to do? If I get a chance to fight on the biggest stage of boxing history in this era, why not? Why not take that stage? Why not take his fans? After Floyd Mayweather, somebody has to take over."

Asked if he would keep the beard for the Molina fight, Broner said that he was not sure. Actually, it depends on whether his 5-year-old daughter allows him to.

"I don't know. My daughter, she don't like it too much," said Broner. "I might cut it, I might now. This is definitely the first time that I've grown a full beard, and I think this is the look for me right now. She's a little bit too young to understand business, so I might be keeping it for a while."