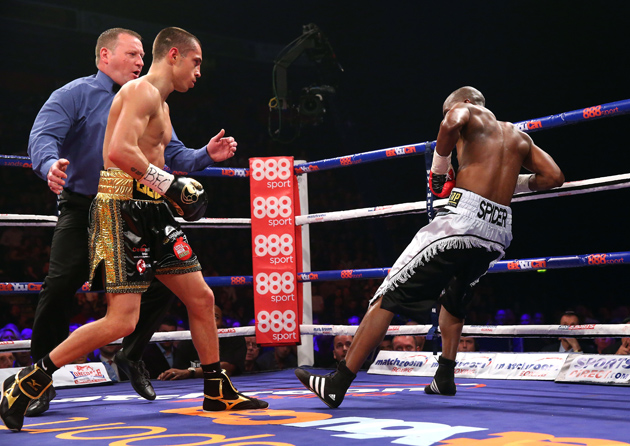 Scott Quigg knocks down Tshifhiwa Munyai for the second time during their junior featherweight fight at MEN Arena on April 19 in Manchester, England. Photo by Alex Livesey/Getty Images

A terrific left hook lead dropped Munyai with a minute remaining in what was a busy opening session. The experienced South African, who substituted original opponent Nehomar Cermeno, rose gamely to see out the round, however a gulf in class had been established and the clock was ticking at pace.

Quigg, who is rated No. 6 by THE RING at 122 pounds, maintained his aggression and looked to draw his man into a punching exchange early in Round 2. Munyai initially displayed adept lateral movement, but Quigg suddenly trapped him near the ropes and unloaded a solid left hook, right hand combination which sent the visitor to the canvas once more.

One expected Munyai to take the full count but he bravely scrambled to his feet to face the inevitable. Quigg, officially 121.5 pounds, advanced with intent and a brisk follow up combination sent the stricken fighter to the deck for a third time, and there was concern at ringside as Munyai took several moments to recover his senses.

“I wanted to make a statement and I promised that you would see the best of me,” said Quigg, when interviewed by Sky Sports. “Nobody has done that to Munyai. We only had a weeks’ notice to figure out what he would bring to this fight, but I’ve just went out there and demolished him.”

Quigg (28-0-2, 21 knockouts) is one of the finest junior featherweights on the planet and tonight was simply a turkey shoot. There is little doubt that we’ll see the very best of the Bury star when the quality of his opposition increases.

Former British champion Anthony Crolla scored a convincing tenth round stoppage over John Murray in a high quality lightweight attraction. The bout pitted two of the most popular fighters in Manchester against one another in a battle for serious bragging rights and some of the action was outstanding.

Murray, who was defeated by Brandon Rios in a 2011 WBA title bout, attacked with fury from the start, but Crolla boxed clever and avoided the worst of his opponent’s brutal assaults. As the bout reached the midway point Murray’s attacks weakened and Crolla began stepping forward with his own work, which clearly had an effect.

Exhausted and wounded around the eyes, Murray was easy pickings for the fresher fighter in Round 10. He went down on the end of a sharp combination and was rescued by the referee moments later, as Crolla unloaded at will.