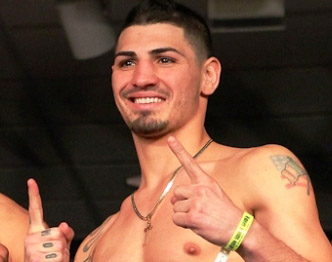 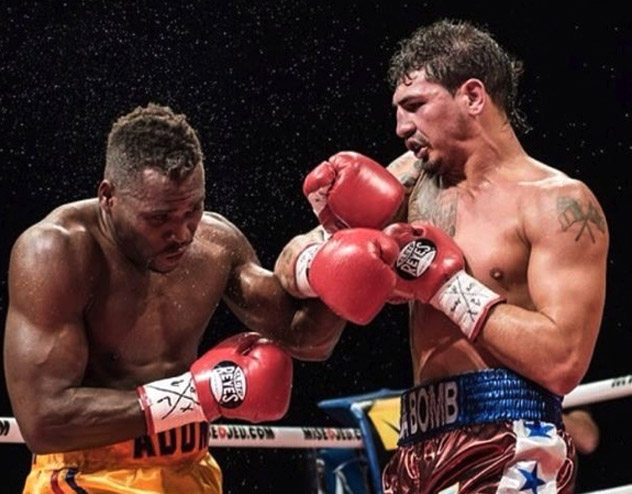 After a disappointing 2013, Donovan George is looking to get his career back on track this Friday, when he meets seasoned veteran Troy Lowry over six rounds in Hammond, Ind.

Last year, “Da Bomb” decided to drop from 168 pounds down to middleweight after drawing with battle-tested Mexican David Lopez in a bout most thought George had won. The calculated risk didn’t work out, though, and he was stopped in the sixth round by once-beaten Caleb Traux.

“I thought I’d be the best fighter at 160 pounds and I learned the very hardest way possible that I’m not a 160-pound fighter,” George told RingTV.com over the phone. “… but I’m a little hardheaded and I had to learn the hard way.”

With that lesson learned, the 29-year-old veteran decided to return to super middleweight, where he’d scored wins over recent Genanady Golvokin victim Osumanu Adama, then-undefeated Cornelius White, and Dionisio Miranda. He had also gone the distance with Edwin Rodriguez (he lost a unanimous decision) and lasted nearly 12 full rounds before being stopped by Adonis Stevenson – the longest anyone has ever gone against the current RING light heavyweight champ.

“I’m very, very realistic. I know where I am in the pecking order,” said George (24-4-2, 21 knockouts). So, he is now working with new promoters Hitz Boxing and Round 3 Productions of Chicago, and intends to take two or three smaller fights before working his way into the title picture.

Here’s what George had to say ahead of his comeback:

Anson Wainwright – You endured a tough 2013. Tell us about that.

Donovan George – It was definitely a setback for me but that’s a part of boxing. Yeah, it was a pretty unfortunate year for me all ‘round … besides obviously getting married, which was the highlight of my year.

Boxing-wise it was rough. I fought in my hometown with Lopez, I think I won 7 rounds and I get a draw – definitely no home cooking in Chicago. If anything it feels like [the judges] were against me.

AW – The middleweight move didn’t go the way you hoped and you’re now back at 168?

DG – I thought I’d be the best fighter at 160 pounds and I learned the very hardest way possible that I’m not 160-pound fighter. I can’t make the weight healthily. I guess you realise not eating for 5 days and living in a sauna before a fight probably isn’t the best idea but I’m a little hardheaded and I had to learn the hard way. Now I know I’m a natural 168.

AW – You also hurt your right hand and had to have surgery on it?

DG – I had hand surgery. It was broke in so many places. I had to go and have it rebuilt, have bone taken from my head, my elbow, wrist and put it in my hand and rebuild it from scratch. So now for the first time in three years I’ll be healthy, so I’m excited about that. I’m at the right weight and I’m going to go out and give it one more shot.

I kept consistently breaking my hand in every fight and then when I fought Truax I broke it in three places, it ballooned to five times the size and I thought it’s finally time to have surgery. I used to take a [cortisone injection] and I’d fight but that probably didn’t help me at all. Now I’ve taken the time off, got married and got my hand fixed.

AW – So the plan is to work your way back into contention?

DG – Well I feel like I’m finally with the right team right now. I have left Leon [Margules] and 8 Count, I’m not going to say anything negative about them but it just wasn’t the right fit for me at the current moment.

I’m with Bobby Hitz who I’ve known from childhood. We’ve got a plan, he says he’s going to give me four fights and slowly work my way back up and not just have one fight and throw me into a big fight. I’m not trying to be cashed out, I’m in my prime, I’m 29. I know I can be a better fighter than I am, I’ve just got to keep learning. I’m with a new trainer, Sam Colonna, for the first time and I have the opportunity to make something of myself and I’m going to try my best.

AW – As well as a new promoter and trainer, have you made any other changes?

DG – From top to bottom, from the manager, trainer, promoter I’ve got a completely revamped team, the only one who’s still with me is Bernie [Bahrmasel], who’s my publicist. My father, of course, he’s always going to be with me, he’s just not training me at the moment. Other than that I have a whole new team and I’m gonna give it a shot.

AW – Being back in Chicago fighting must be something you’re looking forward to.

DG – It’s gonna be nice, sleep in my own bed before the fight. I live about 20 minutes from the venue so it‘s gonna be great. It’s gonna be packed with a lot of crazy fans there, a lot of my friends and family they’re gonna see my fight live so that’s exciting for me.

At the end of the day I’m gonna take care of business and win, then I’m gonna look forward to fighting again in April. They tell me I’m fighting April 18, so I’m gonna fight every six weeks, how it should be. The old school way. I like it.

AW – What do you know of Friday’s opponent, Troy Lowry?

DG – I’m excited to be fighting back in Chicago and look forward to a knockout performance.

AW – How do you assess things at super middleweight, and are you targeting anyone in particular?

DG – I’m very, very realistic. I know where I am in the pecking order, I know I’m not a name people are gonna be calling out and want to fight. I’m not a big enough name to even get one of these fights. I would LOVE to knock out [Julio Cesar] Chavez [Jr.] after watching him fight [Brian Vera] because I know I could beat him, I know I could hurt him, but I’m a few fights away. I’ve got to work my way back up, I’ve got to get back in the win column. To me it would be ridiculous for me to call out a champion, with me coming off a loss, surgery and a layoff. I’d sound like an idiot calling out all these top fighters. In a perfect world I would love to fight Chavez.

AW – Looking back, its never good to lose. That said, you gave Adonis Stevenson a great fight before he stopped you late in the fight?

DG – It looks good for me – I’m the only guy to go into the 12th round with him. To go out there and hurt hum, give him a fight, it was a very competitive fight. He broke my ribs in the sixth round when I fought him and I came back and I almost knocked him out in the sixth round. It was a great fight for me, he was the better man that night, he was just so big and so strong. Every punch he hit me with it hurt like you can‘t describe. I was hurt for a month after that fight, my memory, no balance. He did some damage to me like nobody else has ever done but I would definitely do it all over again. It was a great fight … so I know I can hang with the best in the world. I’ve just got to get where I got to be.

AW – What would you say to the super middleweight division?

DG – I’m gonna let my fists do the talking and I’m gonna just keep fighting every six to eight weeks and build some momentum. When I’m coming off three, four or five wins all in a row, all in devastating fashion, I’m gonna start getting noticed. If I’m gonna sit here and call out the world champions they’re gonna laugh at me. I’m a realist, I understand the position I’m in. If I keep winning fights I’ll be in a position to call them out.