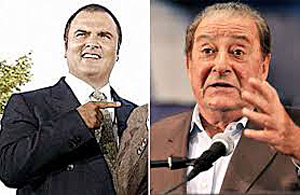 On March 20, Valcarcel granted Golden Boy Promotions and Top Rank — who promote Russell and Lomachenko, respectively — a period of 30 days to make the bout.

The subject of the purse bid was broached on Thursday with Golden Boy CEO, Richard Schaefer, who was overseeing the final press conference at Hamilton Live restaurant in Washington, D.C., in advance of Saturday's Bernard Hopkins-Beibut Shumenov card.

"What, you want me to tell you how much I'm going to bid? Well, we'll see. We'll see what's going to happen. Ask me tomorrow. I'm holding my cards," Schaefer told RingTV.com. "If you win a purse bid, then you do a fight. You work with the other guy. You win a purse bid, and that's all that it is."

As recently as Wednesday, however, Schaefer had stated his unwillingness to work with Top Rank CEO Bob Arum.

Schaefer reiterated that stance on Thursday.

"If people say 'That's not really right, that's arrogant of Schaefer,' well, then, you know what? Then, if that's arrogant, then I guess that it was arrogant of Arum as well, because he told Shane Mosley that 'I can get you a [Manny] Pacquiao fight, but you have to leave Golden Boy,'" said Schaefer.

Lomachenko had said he wanted to make history by becoming a titleholder in what was billed as his second professional fight. According to Fight Fax Inc., Lomachenko is actually 7-1 because he was paid to take part in six "World Series of Boxing" contests.