Bernard Hopkins to Beibut Shumenov: ‘Get ready for school, student’ 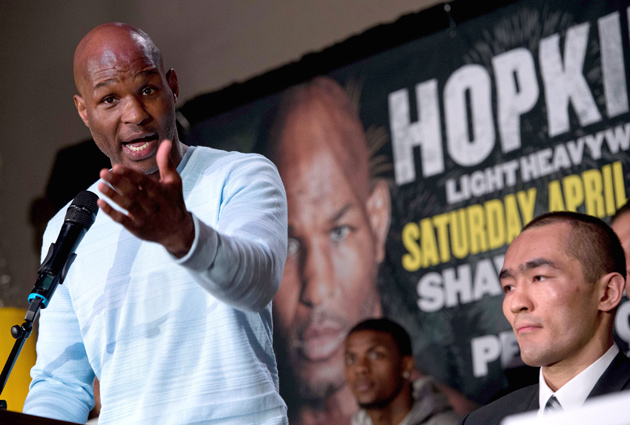 Bernard Hopkins (left) holds court while Beibut Shumenov looks on during their press conference in Washington ahead of their light heavyweight unification title fight on Saturday. Photo credit should read Nicholas Kamm/AFP/Getty Images

That changed during Thursday's final press conference at The Hamilton Live restaurant in Northwest, Washington, D.C., where Hopkins raised the intensity by taking shots at Shumenov's wealthy background.

A former Philadelphia street thug, Hopkins, 49, survived two stabbings by the age of 17, when he was jailed for five years in Pennsylvania’s Graterford Prison. By contrast, Shumenov is an attorney whose father is an extremely successful businessman in his native Kazakhstan.

"He said that he's ready to die for the win, well, I hope that he means that. He wants to go home. He's rich, and I'm from out of the 'hood. We had to fight. So when a man talks that nonsense, trying to hype himself up like he's willing to do anything, and that you're willing to die for it?" said Hopkins, directing a gaze at Shumenov.

"You're rich. You're fighting for a hobby. We had to fight to keep a hat on in North Philly and to keep change in our pockets. I'm going to hold him to that word, and to that adversity. If he means that, then remind him after this is over with. Let's see if he really has that in him."

Hopkins won the IBF middleweight title in Landover, Md., nearly 19 years ago to the day. He defended it 20 times, going undefeated for more than a decade. As a 175-pounder, Hopkins has twice eclipsed the record for being the oldest man to win a major title, the last time, when he as 48.

"After this is over with, let's pray that he has a career going forward," said Hopkins. "There are a whole list of guys who didn't survive the mental beatdown of 'How can a 50-year-old man beat me like that?"

Hopkins had been at the podium for less than 30 seconds — to the right of Shumenov — when he took the younger man's WBA belt and placed it next to his IBF version on the other side.

"This is a defense of my legacy," said Hopkins before looking directly down at Shumenov, who stared straight ahead as he spoke. "Get ready for school, student."

Shumenov stepped back up to the podium to defend himself and took back his belt.

"First of all, it's a great honor fighting here. I have a great deal of respect for you. But you're mistaken if you thinking that I'm thinking that I'm fighting a 50-year-old fighter. You're mistaken. You're wrong. You have to be patient about taking my belts. On Saturday night, we're going to see who is taking whose belts. I was ready to fight at this level for several years. For me, this is a priority," said Shumenov.

"What is not the most important thing is money. I am fighting for the honor and the glory to be the best and to be acknowledged as a great fighter. This is a great opportunity for me. That's right, I am fighting and I am not thinking about future fights. I'm prepared for this fight like this is my last fight, and this fight only. And I am ready to die to get the victory, and you will see that on Saturday night. I am a man of my word, so you will see me in victory."

Hopkins, for his part, appeared happy to have gotten a rise out of Shumenov.

The back and forth between Hopkins and Shumenov followed a good-vibrations speech from Kairat Umbarov, an ambassador from Kazakhstan.

"I would like to use this opportunity to recognize the friendship Kazakhstan and the United States have developed through sport, boxing and this week's championship bout," said Umbarov, adding that Shumenov "personifies the best qualities of Kazakhstand and the Kazakh people."

"Beibut has fostered a genuine friendship with the United States both inside and outside of the ring. I believe the power of sports transcends borders and brings people of different nations closer to each other."

But that didn't stop Hopkins from weighing Shumenov's resolve coming from a wealthy background.

"Timing is everything. You can probably agree that it was the perfect timing for that to come out…What you were actually born into, that can play a really important role when you get down to the trenches. I had to remind him of that, in case he might have forgotten, or tricked himself or fooled himself," said Hopkins.