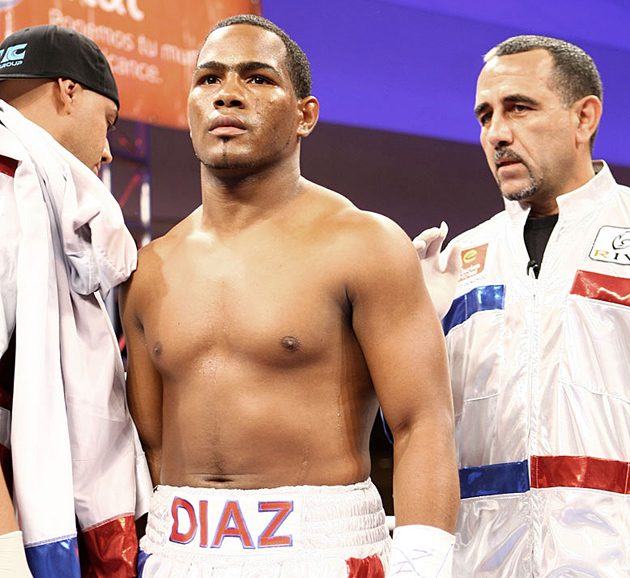 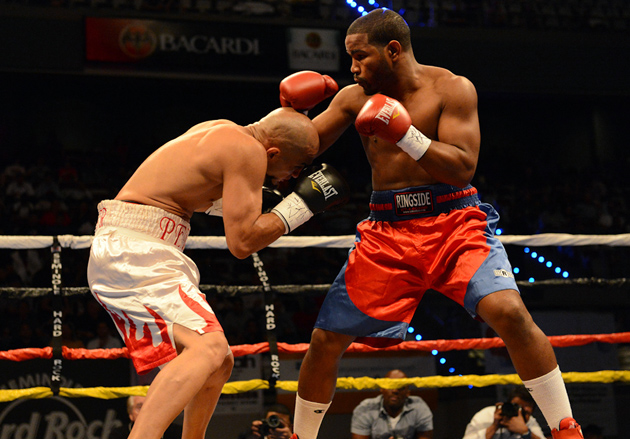 Felix Diaz (right) attacks Javier Perez during their eight round welterweight bout on May 18, 2012 in Hollywood, Fla. Photo by Ron Elkman/Sports Imagery/Getty Images

Unbeaten welterweight Felix Diaz knows he is a talented boxer. He has an unbeaten professional record and an Olympic gold medal as proof thus far.

While those accomplishments are respectable, he is still a ways away from being considered a legitimate prospect.

Diaz, a 2008 amateur standout from the Dominican Republic, knows this, which is why he decided after his last bout to travel to Oxnard, Calif., and work with noted trainer Robert Garcia.

The boxing world will find out if it was a good move for Diaz on Friday, when he fights Emmanuel Lartey in an eight-round bout at the Convention Center in Monroeville, Pa., just outside of Pittsburg.

The bout will be part of a tripleheader ShoBox: The New Generation telecast of an Iron Mike Productions-promoted card. The live broadcast begins at 10:45 p.m. ET/ 7:45 p.m. PT.

In his last bout on Aug. 17, Diaz (14-0, 8 KOs) scored a first-round knockout over Edgar Llanes in Isla Verde, Puerto Rico. About three months after the fight, Diaz decided to travel to Oxnard, loved the surroundings and hit it off with Garcia.

"Robert has a great trainer, has a great gym, and a great team," Diaz told RingTV.com after a recent workout. "He's helped me a lot with my style. I've learned a lot, especially with throwing the right combinations at the right time. I believe it has complimented my natural ability."

His fight against Lartey will be at 140 pounds. There are a number of intriguing fights for him at that weight, including against other unbeaten fighters.

In fact, he would rather fight unbeaten fighters or opponents that are not pushovers. The 30-year-old Diaz is eager to apply what he has learned thus far with Garcia, likely because he does not want to battle against Father Time later in his career.

Aside from his mother and daughter, Diaz is motivated to put his homeland of the Dominican Republic on the boxing map. While the country has been a hotbed of baseball talent, Diaz might be the fighter that could be the face of boxing in that country.

"The Dominican Republic has been known for baseball, but there are not a lot of resources for boxing," said Diaz, who won a gold medal in the Beijing Olympics in 2008. "To be a world champion from such a small country world be huge. It would be a great accomplishment for the Dominican Republic."

Diaz also credits working with fellow Latin American fighters Marcos Maidana, Jesus Cuellar, and Thomas Dulorme at Garcia's gym for guiding and pushing him. Those fighters are excellent examples that the right trainer may be key to enhance one's natural ability.

The road is long and winding towards a world title, but Diaz believes he has as great a chance to do well now that he has Garcia in his corner.

Francisco A. Salazar has written for RingTV since October of 2013 and has covered boxing in Southern California and abroad since 2000. He also covers boxing for the Ventura County (CA) Star newspaper, Boxingscene, and Knockout Nation. He can be reached by email at [email protected] or on Twitter at FSalazarBoxing