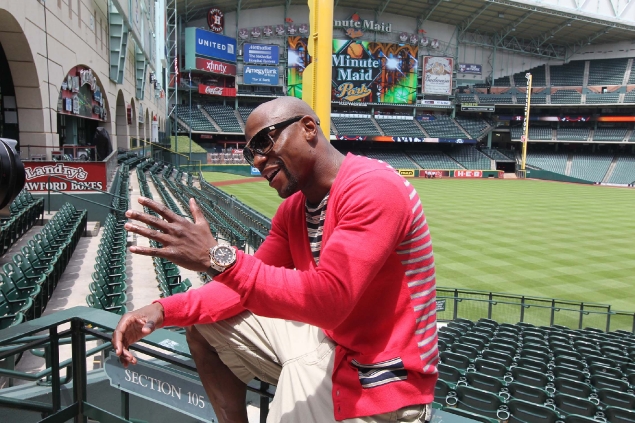 Floyd Mayweather Jr.'s base salary of $73.5 million over the course of his unanimous decision victories against Robert Guerrero and Canelo Alvarez made him the highest-paid athlete in 2013, according to ESPN The Magazine's annual Top 25 list.

Next on the list behind Mayweather, 37, is Portuguese soccer player Cristiano Ronaldo with $50.2 million. The highest-ranking NFL player is the Green Bay Packers' quarterback Aaron Rogers in fourth place at $40 million, with the NBA Lakers' Kobe Bryant in eighth place at $30.5 million. RING heavyweight Wladimir Klitschko is 20th with $24 million.

Mayweather pocketed a guaranteed $32 million when he vanquished Guerrero in May of last year, and a career-high  $41.5 million purse for September's win over Alvarez, the latter of which grossed an all-time record $150 million.

Mayweather's purse against Guerrero matched what he received for a unanimous decision over Miguel Cotto in May 2012, a bout for which the boxer netted a total of $45 million.

It was back in May of last year that Sports Illustrated that Mayweather would be the highest paid athlete over the past two years, having parlayed that into a successful promotional company named for him.

An online report by Forbes Magazine estimated that Mayweather’s exclusive six-fight agreement with Showtime — his third in the deal being a May 3 clash with Marcos Maidana – could be worth a guaranteed $250 million to Mayweather, who made his first-ever appearance on Showtime Pay Per View when he beat Guerrero.