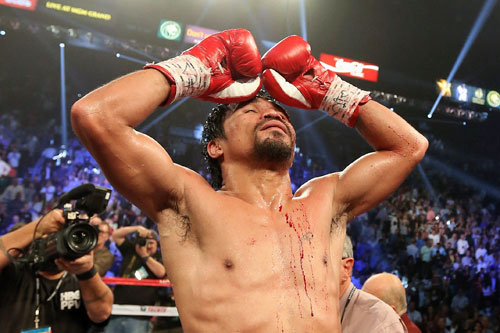 Manny Pacquiao: Think about what Pacquiao did in his rematch against Tim Bradley on Saturday in Las Vegas. The Filipino was 35, one fight removed from a one-punch knockout loss and perceived to be in decline. He was facing a gifted, undefeated opponent who was in his prime and on everyone’s pound-for-pound list. At best, this was a 50-50 proposition for Pacquiao. And what did the old man do? He turned in a dominating performance, winning a one-sided decision that no one – including Bradley – would dispute. Pacquiao (56-5-2, 38 knockouts) might not be what he once was but, at maybe 80 or 90 percent, let there be no doubt that he remains formidable. As in their first fight, which Bradley won by a controversial decision, Pacquiao was too good and too quick for what we can now call an inferior opponent. He was busy, accurate in spite of Bradley’s defensive skills and in command for most of the fight. Particularly striking were the defensive numbers: Bradley connected on only 19 percent of his punches in their first fight, only 22 percent on Saturday, well below the welterweight average, according to CompuBox. (Pacquiao connected on 35 percent.) Bradley had his moments but moments generally don’t win fights. No, it was Pacquiao’s night. I won’t suggest that it was his greatest night. It’s hard to top his victories over Oscar De La Hoya and Ricky Hatton when he was at his peak. At the same time, given the facts going into the fight, this will be remembered as one of the most important victories of his career.

Tim Bradley: No one is shocked that Bradley lost on Saturday. It was how he lost that was somewhat surprising. Bradley (31-1, 12 KOs) had just outboxed a master tecnician in Juan Manuel Marquez in his previous fight yet chose to wing wild punches against Pacquiao in hopes of duplicating Marquez’s one-punch KO in 2012. The relatively slow Marquez is a better matchup for Bradley, who beat the Mexican in good part because of his speed and athleticism. Pacquiao’s quickness posed an unusual challenge. Still, Bradley is clearly at his best when he boxes. That was obvious when he slugged it out with Ruslan Provodnikov and almost lost. And it was obvious on Saturday. He should’ve fought intelligently even if he thought the judging cards would be stacked against him instead of looking for one big shot. Pacquiao simply fought with cautious aggression – avoiding almost eight of every 10 punches Bradley threw — to win the rematch handily. I thought Bradley clearly lost their first fight and he was no better on Saturday, losing 116-112, 116-112 and 118-110 on the official cards. I had it 117-111. And Bradley made it worse by clowning – making faces, summoning Pacquiao forward only to get the worse of exchanges. That’s something a fighter can get away with when he’s winning, not when he’s getting his ass kicked. In short, the first loss in Bradley’s career was a borderline disaster. Of course, he remains an elite fighter but his stock dropped.

Bradley’s excuse: The great trainer Emanuel Steward once told me a story about the epic fight between Marvin Hagler and Thomas Hearns, the latter of whom Steward trained. Steward said that Hearns injured his hand during the fight, implying that it played a role in Hearns’ defeat. However, he told me that he implored Hearns to refrain from saying anything about the injury afterward because he didn’t want to sully Hagler’s much-earned glory. Hearns kept quiet. Too bad Bradley didn’t have the same philosophy. Bradley said immediately after the fight that he would make no excuses and then made one, saying he injured his leg in the fight. I understand why he said it. He saw it as one reason he lost the fight and wanted to reveal that fact to the world, which would then presumably be somewhat less critical of him. Instead, all he accomplished was to diminish Pacquiao’s tremendous effort ever so slightly and come off as a sore loser. Bradley obviously is a good person; I don’t believe he intended to be malicious. Still, he did damage with his ill-advised words. He could’ve lost with more class.

Talk of Pacquiao-Mayweather: I’ll start by saying once again that I don’t believe Pacquiao and Floyd Mayweather Jr. will ever fight one another for reasons we’re all aware of. That said, I believe that the money this fight would generate remains a powerful motivating factor to make it happen one day. The principals could still make hundreds of millions of dollars. Plus, Pacquiao’s performance on Saturday removed as doubt as to whether he is a viable opponent for Mayweather. The fans undoubtedly have grown weary of fruitless Pacquiao-Mayweather talk the past few years but they might be invigorated now. And, also once again, Mayweather doesn’t have many good options. His fight against Marcos Maidana on May 3 will do OK from a business standpoint given Mayweather’s drawing power and Maidana’s popularity. However, Mayweather needs a more prominent opponent to do the kind of numbers he and his handlers strive to achieve. Pacquiao-Mayweather would undoubtedly break all records. So no one should get his or her hopes up; we’ve been down this road too many times. I maintain there is hope, though – particularly at this moment.