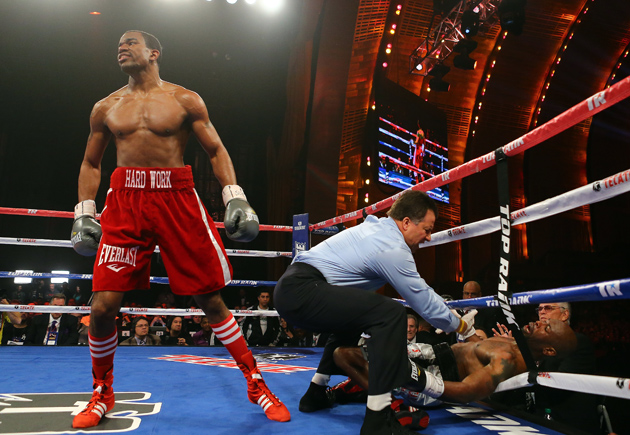 The son of former middleweight contender Eugene "Cyclone" Hart won by shutout scores of 80-70. Hart said that he was facing a southpaw for the first time in his professional career.

"I haven't fought a southpaw since the amateurs. That was my first television fight, and I think I did well getting ready for the main stream. My dad was happy with my performance. A southpaw can make anybody look bad, but as you see, I don't think that I did too badly," said Hart of Clarkson, who lost for the first time since falling by split decision to Jas Phipps last April.

"Even after I hurt him, my dad did not want me to rush things. They told me to box smart and not to rush in and take any gambles. The guy still had knockout power, even though I didn't feel it. His record shows that he has knockout power, so my did said to box him easy and box him smart, so that's what I did. I remained calm and composed. oay eai hMy dad toand mI

Hart is trained by his hard-hitting father, who posted a career mark of 30-9-1 that included 28 knockouts, a victory over Sugar Ray Seales, a draw and a loss to Bennie Briscoe and setbacks against Bobby “Boogaloo” Watts, Willie “The Worm” Monroe, Marvelous Marvin Hagler, Vito Antuofermo and Eddie Mustafa Muhammad.

"I know that we have to add on to what we've got to make him better than what he is, and that's what we're going to do for him. I see a lot of mistakes that he made, but he was able to overcome them because he had the right hand uppercut and the left hook," said Eugene Hart.

"When he hurt him in the first round with the right hand body shot and I knew that we had a chance to make this happen. Now, I see that because he was knocking everybody out, he was getting comfortable with just knocking everybody out. I'm glad that we went the distance so we can work on those things."