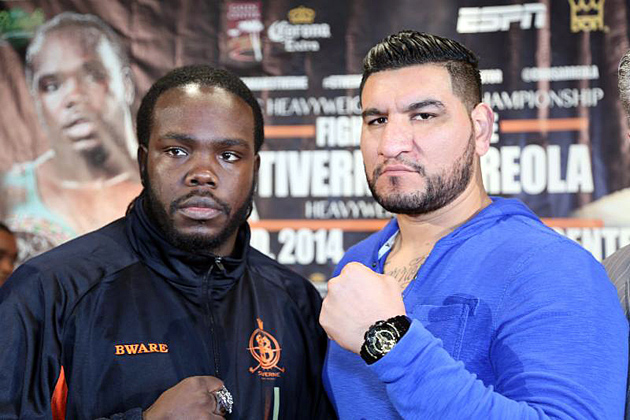 Heavyweight Bermane Stiverne has vowed that on "May 10, I will be crowned the heavyweight champion of the world" after his rematch at the USC Galen Center in Los Angeles, Calif., against Chris Arreola, whom he vanquished by unanimous decision in April 2013.

Stiverne and Arreola are meeting for the WBC belt vacated by Vitali Klitschko, with the winner having been mandated to defend against Deontay Wilder, last month's 96-second stoppage winner against Malik Scott.

"It's not about being in shape as Arreola claims he wasn't the first time. I've got the skills and I'm always in shape," said Stiverne in a prepared release.

The victor between Wilder and the Stiverne-Arreola winner must next face that from a second mandatory between unbeateen fighters Mike Perez and Bryant Jennings.

JAVIER FORTUNA TO FACE JUAN ANTONIO RODRIGUEZ ON MAY 31

Junior lightweights Javier Fortuna (24-0-1, 18KOs) and Juan Antonio Rodriguez (26-4, 23KOs) will clash on May 31 at The Tropicana Hotel and Casino in Las Vegas, promoter Sampson Lewkowicz informed RingTV.com on Wednesday.