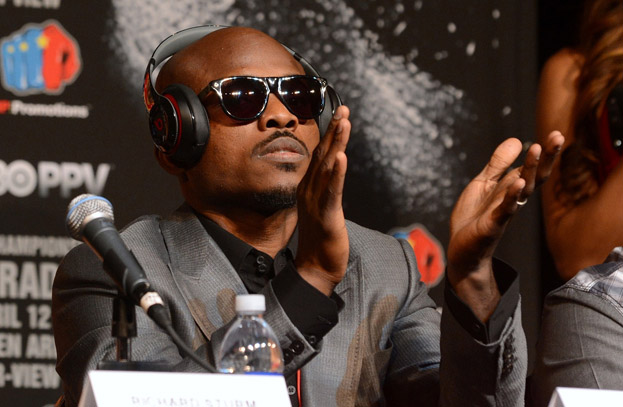 "Oh, hell yeah. Hell yeah. No doubt, man," said Bradley, when asked if he considered taking his own life due to criticism he received after defeating Pacquiao. "Me and my wife, we would sit there, man, in the bed and read all of this stuff. We would get phone calls. Once the death threat rolled in I was like, 'This is ridiculous.'"

One of the more frightening warnings came in the mail, according to Bradley.

"Written. No address. Just a letter. Plus I got letters from like fans belittling me. They were just crazy. Telling me, like, 'You're not a true champion and don't go patting yourself on the back because you didn't win,'" said Bradley, who is 30.

"The turning point," said Bradley, "was getting away."

"I stopped reading everything…I don't really read too much anymore because of a lot of the negative things that I see. Once I got away, I started to realize what was important in my life and who was important…I realized what I needed to do and how I needed to change," said Bradley, a father of five.

"Now, it's like, I can accept criticism. I don't care anymore. I got told every word that you could possibly have said to me and now, don't nothing affect me. You can tell me I suck and I'm the worst fighter in the world and that I'm a horrible human being. I know who I am but I'm a great fighter."

Bradley will try to prove this, yet again, during Saturday's rematch with Pacquiao on HBO Pay-Per-View from the MGM Grand Garden Arena, site of their previous bout.

The victory over Marquez followed a unanimous decision last March over Ruslan Provodnikov, who floored Bradley in the 12th round at the StubHub Center in Carson, Calif.

"At the time, when I was going through stuff, the whole controversy, it was terrible. It was terrible for my family. But I look back at it now and I'm, like, thankful that it happened. I'm so thankful that it happened. We wouldn't have never gotten the Ruslan fight if the controversy had never happened. I wouldn't have never gotten that Marquez fight because Marquez didn't want to fight me. He thought that I was damaged goods. But after the Marquez fight and I beat him, now Manny's trying to rebound. It's the perfect set-up. It's the perfect time," said Bradley.

"With two good feet, I'm going to sit down on my punches a lot harder and throw a hot harder shots. I'll be able to move and be a lot quicker," said Bradley. "Mobility is key in this fight. As long as I can move and as long as I've got good legs, I should be able to find the angles and find room to punch. I'll be able to do whatever I want to do."

"At his age, a young fighter like Tim Bradley can wear him down. He's going to box; he's going to brawl. Every round, we'll make adjustments. You're not going to see Bradley backing up. You're going to see Bradley right there waiting for Pacquiao to come knock him out. Most fighters come straight forward but the way we'll come after him will be with smart pressure. Bradley is very elusive."

Still elusive is general praise for Bradley despite his victories over Provodnikov and Marquez.

"I would go to the gas station and of course, they'll leave before they'll say something. When they would drive off, they would say, 'You didn't win that fight. You didn't beat Pacquiao.' I would be like, 'Yeah, you're driving away right now but you couldn't say that to my face. Occasionally, you'll get some brave guys who you want to slap upside the head but I'm not looking to get a lawsuit. I've learned from a lot of guys. I'm not going to slap anybody," said Bradley.

Although Pacquiao claims to be in top form yet again, having vanquished Brandon Rios by unanimous decision in November, Bradley vows to prove he is truly the better man on Saturday.

"Manny had a successful fight against Brandon Rios and now, we're back at it. I think that the wait was worth it. I'm much more mature now as a fighter and I'm much more mature as a person and I'm very confident now, man. I'm expecting Pacquiao to be aggressive. I'm expecting him to come out to prove a point. I think that Manny has not lost a step. I saw him in the ring for his last fight and he looked sensational. The only thing that I feel honestly is that he may lack is fire like I've said," said Bradley.

"I just feel that his motivation is not there. He's been on the top for a very long time. He has over 60 fights and has been in the ring with all of the best. I mean, he's 35 years old. I'm thinking this is one fight too late for him. I know that this is my time. I know the reason why the stage is set. I know exactly why the controversy happened the first time. It's my time. It's my time and it's my moment. I don't care who believes it or don't believe it but on Saturday night, I'm going to justify that by getting in there and taking care of my business."

Click here for a video documentary of Tim Bradley by KnockoutNation.com