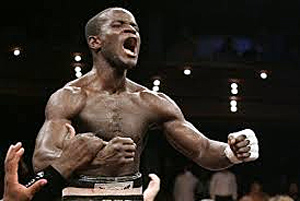 NEWCASTLE, Australia – Joshua Clottey fought the fight of his life on Wednesday, dominating Anthony Mundine to a one sided unanimous decision.

The first round was a very close. Both veterans threw body shots with bad intentions. Clottey appeared to do enough to win the round, although not convincingly.

Round 2 saw an even higher pace from both men. Clottey landed the harder punches and staggered Mundine a few times throughout the round. Towards the end of the round Mundine landed two punches that appeared to be blatantly behind the head prompting the referee to issue a warning.

Round 3 was more of the same. Both guys continued to dig hard to the body. In the middle of the round Clottey pinned Mundine against the ropes following a hard left hook. Mundine rallied back and landed some good shots, but late in the round Clottey threw a hard right hand over the top of a lazy Mundine jab and floored him hard. Mundine barely beat the count and was lucky to be saved by the bell.

Clottey began to take over the fight in round four. Digging hard with left uppercuts to the body and following up with overhand rights. Mundine managed to buy some time in the middle of the round as his low top boxing shoe slipped off. The rest was badly needed as Mundine was clearly feeling the effects of Cottey’s body punches.

Clottey started Round 5 off strong again working the body. Mundine once again caught a break as the referee stopped the action in the middle of the round to cut some tap hanging from Clottey’s glove. Clottey slowed his workrate down as the round went on and Mundine took advantage, possible stealing the round.

Round 6 was the most exciting round of the fight. Clottey came out clearly more aggressive than he was in Round 5. In the final minute of the round Clottey nailed and dropped Mundine with a hard left uppercut to the chin. Mundine barely beat the count only to go back down from a combination as he was clearly still on shaky legs. Mundine managed to last until the bell although he looked badly hurt and out of his league.

Mundine rallied back in Round 7 and managed to smother most of Clottey’s work. Both men appeared to slow down, clearly feeling the effects of the gruelling pace of the fight.

Mundine came out again trying to survive in Round 8, holding often and refusing to let go. Two minutes into the round Clottey dropped Mundine for the fourth time with a hard combination to the body. Mudine barely made it to his feet and looked to be in bad shape in the final minute. Credit to Mundine’s toughness he once again managed to survive the round

Round 9 was more of the same; Clottey was all over Mundine from the opening bell and never let him recover.

Round 10 saw Mundine come back with a second wind, sitting down on his punches and clearly going for a knockout. It wasn’t there to found. As was the story of this fight, late in the round Clottey nailed Mundine with a hard left hook to the head and dropped Mundine hard. Mundine’s father and trainer stepped onto the side of the ring with the towel in his hands only to see his son once again get up and finish the round.

Mundine came out in Round 11 and truly showed his heart. Although he pretty clearly lost the round, he never once stopped trying to land a miracle punch. As he struggled to make his way back to his corner following the round he looked to have nothing left.

Round 12 was one for the ages. Mundine came out bombing early clearly behind on the scorecards. Clottey continued to fight the same fight he had all night, staying inside and never letting Mundine get a moments rest. By the last minute of the round Mundine appeared to have lost the desire and ability to press for the knockout. As the final bell sounded his face told the story. He was a beaten man, but he never gave up. It was a unanimous decision, although the scores were no consequence.

This was a crippling loss for the 38-year-old Mundine, a former super middleweight beltholder, and clearly spells the end for his career, at least on the world level.

Clottey resurrected his career and proved that he is still a force to be reckoned with at 154 pounds.

Ahmed Dib (former featherweight beltholder Billy Dib’s brother) knocked out the aptly named Dennapa Bigshotcamp. Bigshotcamp spent the majority of the fight channelling Ricardo Mayorga, taunting more than fighting. The most entertaining moment of the fight came when Bigshotcamp landed flat on his back following a failed front flip over the top rope. Bigshotcamp ended the fight in style managing to do three push-ups while being counted out following a crushing right hand from Dib.

Former Australian amateur champion George Kambosos knocked out Thongthai Rajanondh with a crushing right hand to the body at the end round one.

In the co-feature, cruiserweight prospect David Aloua 11-1 knocked out the previously undefeated Brad Pitt 15-1 with a flurry of punches in round four. The real damage was caused by a huge straight right hand from Aloua over the top of a lazy Pitt jab. Pitt was ahead on the scorecards at the time of the stoppage, having controlled the early rounds with his hard left jab and constant body work.