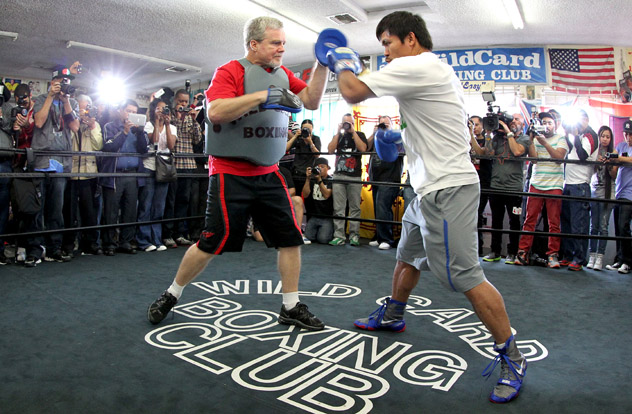 LAS VEGAS — Tim Bradley has noted a lack of hunger in Manny Pacquiao during the Filipino veteran's November unanimous decision over Brandon Rios, and Pacquiao has admitted that "Sometimes, I'm so nice to my opponent."

"It was late in that fight, and I could read Manny's lips. Manny was saying, 'Are you okay' and Margarito said 'Yeah.' I  was a little upset that he didn't finish him," said Roach, during a Tuesday interview with a group of reporters at the MGM Grand.

"It was getting late in the fight and Manny was looking at the referee like 'Come on save this guy.' The ref wouldn't do anything about it or the corner, so he was content on just winning the rounds at that point. I think every fight should end in a knockout."

Pacquiao will attempt to do just that during Saturday night's rematch with Bradley, who dethroned Pacquiao as WBO welteweight titleholder by disputed split-decision in June 2012. Pacquiao next fight was a sixth-round stoppage loss in December 2012 to Juan Manuel Marquez, against whom Pacquiao is 2-1-1.

In his past three fights, Bradley has beaten Pacquiao, rose from a 12th-round knockdown to unanimously decision Ruslan Provodnikov and won a split decision over Marquez.

The WBO has mandated that the winner between Bradley and Pacquiao face that from a May 17 clash between Marquez and Mike Alvarado.