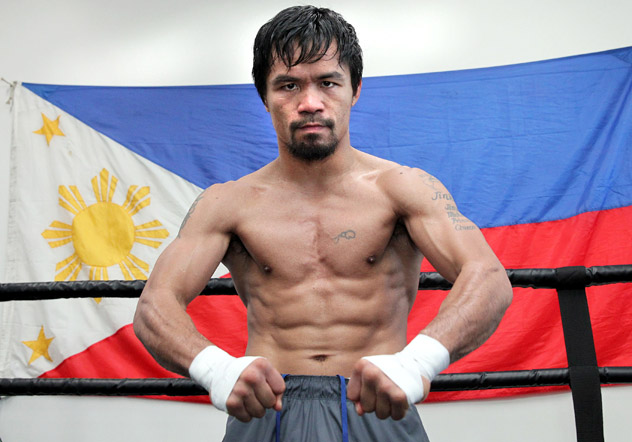 LAS VEGAS — Although Manny Pacquiao would consider a fifth fight against Juan Manuel Marquez should he be victorious in Saturday's rematch with Tim Bradley, he dismissed the notion of a third bout with Bradley.

In his past three fights, Pacquiao lost a disputed split decision to Bradley, was left face-first on the canvas and unconcious following a sixth-round knockout loss to Juan Manuel Marquez, and then rebounded with a unanimous decision over Brandon Rios.

In his past three fights, Bradley has beaten Pacquiao, rose from a 12th-round knockdown to unanimously decision Ruslan Provodnikov and won a split decision over Marquez.

Speaking to a packed VIP room of reporters at the MGM Grand on Tuesday, Pacquiao discussed both the rematch with Bradley and the notion of another fight with Marquez, against whom Pacquiao is 2-1-1.

"After that first fight with Bradley, we thought that we had nothing to prove to fight him again because it was very clear in the eyes of the audience and the fans that we won the fight. But there's a question in the minds of the fans," said Pacquiao.

On the other hand, trainer Freddie Roach likes the thought of yet again facing Marquez, whose May 17 clash with Mike Alvarado has been declared an eliminator for the right to face either Bradley or Pacquiao.

"That's a fight that we wanted first and we're anxious to get that back but we know that we have to look impressive for that fight to happen. We want that 100 percent. Bradley's enough motivation for us but we'll take it one fight at a time," said Roach.

"I do look forward to getting that fight back against Marquez, though, one more time. I think that coming off the Rios win, he looked much better in that fight, pretty much winning every round. I think that if we have that same kind of performance on Saturday that Bradley won't be able to hang with us."

PACQUIAO TO SHOW 'SPEED AND POWER' TO BRADLEY; ROACH: 'WE LET HIM OFF THE HOOK'

Bradley thought the 35-year-old Pacquiao looked tentative in defeating Rios and has questioned his hunger.

"My plan in this fight is to throw a lot of punches. More than [in the Rios fight.] I don't care if the fight is stopped or not. This time, I have to prove that I can still give a good show, that I'm a hungry Manny Pacquiao. Aggressiveness."

Roach agreed that Pacquiao showed too much compassion toward Bradley at times in their first fight.

"I think that we had moments in that fight where we hurt him and we let him off the hook a little bit because Manny felt like there was no reason to hurt him because he was winning so easily. But, the thing is, it was a good learning lesson for us," said Roach, adding that he is "not impressed" with Bradly's speed.

"Because if we got to get him out of there, then, there's no judges and there's no bad decision. It was a good experience, but Manny definitely had chances where he had hurt him and he could have finished him. Manny has felt some disrespect from Bradley, and I think that he will pay him back for that."

"Of course, I'm always thinking about his challenge to me that I don't have that killer instinct or that hunger anymore," said Pacquiao. "So I have to prove that to him and to myself. I will show him my speed and my power."

ROACH HAPPY WITH THE JUDGES

On Monday, Canadian Craig Metcalfe was named to replace England's John Keane as a ringside judge for Bradley-Pacquiao II after Keane withdrew due to illness.

Metcalfe, who has worked neither Bradley's nor Pacquiao's previous fights, was named by Nevada State Athletic Commission Chairman Francisco Aguilar after having consulted with both camps.

The other judges for Bradley-Pacquiao II are Glenn Trowbridge of Nevada and Michael Pernick of Florida. The referee is Kenny Bayless, who was the third man in the ring for Pacquiao's loss to Marquez as well as the second matchup between Pacquiao and Marquez.

"If you need a referee who is innocuous and who is the best referee in the world, that's Kenny Bayless. To tell you a deep, dark secret, when they went through the list with the camps, they eliminated certain other referees," said Top Rank CEO Bob Arum.

"But they asked me to tell the chairman that they both wanted Kenny Bayless as the referee for this fight. Both camps. No question, he's the best referee in the world. I don't think that there is even an issue. If you had to pick one, then you would have to pick Bayless."

Bradley was awarded the controversial decision over Pacquiao by scores of 115-113 on the cards of official judges C.J. Ross and Duane Ford. Jerry Roth had the same score for Pacquiao and an informal poll of 51 writers favored Pacquiao over Bradley, 48-3.

"I think that Nevada has a great commission. We were part of the selection process, and we okayed them and Bradley's camp did, also," said Roach. "I think that Kenny Bayless is the top referee in the world right now. I don't have no problem with the referees or the judges."

BABY ON THE WAY

Pacquiao's wife, Jinkee, is pregnant with his fifth child, who could arrive at month's end.

"I'm a little bit sad and I miss my family because they're not here," said Pacquiao. "But I'm excited for the fight and after the fight, I'm excited to bo back home to be there for the upcoming baby. His name is Israel. He will be born probably the last week of this month."

Pacquiao was riding a 15-bout winning streak that had lasted for nearly seven years and was comprised of winning titles over four weight divisions before falling to Bradley.

Asked which victory was the most rewarding, Pacquiao said, "The Cotto fight," adding, "Cotto was not an easy opponent, he's strong. He's a good fighter."

"When that fight first came to me, I said no because he's too big, but then I changed my mind. We were supposed to lose that fight," said Roach, of De La Hoya.

"But we dominated. I knew we could knock him out because I had a chance to train him at one point and I know that he doesn't fight southpaws well and that he has trouble with speed."

Prior to Bradley, Morales had been the last man to defeat Pacquiao, doing so by unanimous decision in March 2005. Pacquiao already had knocked out Barrera in the 11th round in November 2003 before winning their return bout in October 2007.

Roach and Pacquiao named Barrera as the third most rewarding.

"A lot of people thought we were going to lose that fight," said Roach.

Pacquiao is 5-2 with no knockouts since facing Cotto.

HOW LONG WITH PACQUIAO CONTINUE TO FIGHT?

How long will Pacquiao continue to fight?

"I'm happy with my last fight after beating Rios because I showed that I still have that hunger and that speed for boxing. I still have that, even though I didn't fight for one year. I still proved that I can box and continue my journey."

Pacquiao has not pondered losing to Bradley.

But what if Pacquiao does lose to Bradley?

"We've had a great run. I don't think that it's close to being over. His work ethic is great and he's training really hard and he's not missing a step anywhere. I think that you're going to see us around a lot longer than you think."