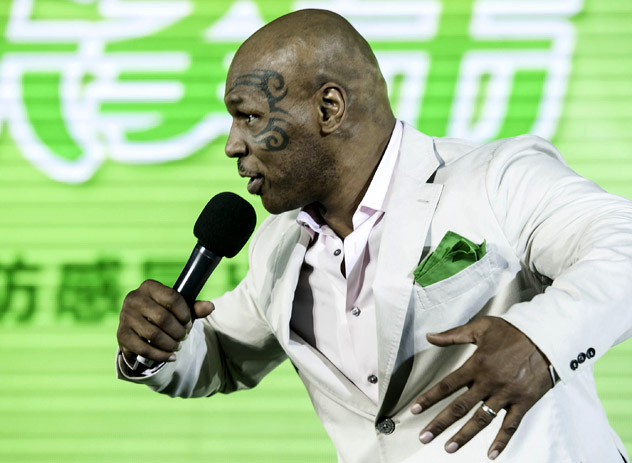 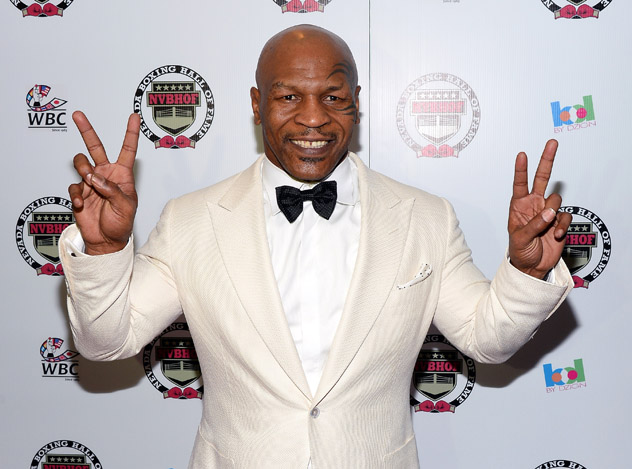 Mike Tyson attending the inaugural induction at the Nevada Boxing Hall of Fame in August 2013. Photo by Ethan Miller/Getty Images.

Former undisputed heavyweight champion Mike Tyson cast doubt on Marcos Maidana's chances of beating Floyd Mayweather Jr. on May 3, said he won't know how good heavyweight Deontay Wilder is until "he starts getting hit," and called Bryant Jennings a "technical, masterful and exciting" heavyweight prospect during an interview on Monday.

Mayweather (45-0, 26 knockouts), 37, will put his RING and WBC 147-pound championships on the line against that of WBA counterpart Maidana (35-3, 31 KOs) on Showtime Pay Per View from the MGM Grand in Las Vegas.

"In my opinion, [Maidana] doesn't" have a chance, said Tyson. "But anything can happen in the ring. But I really don't think so."

Wilder, 28, is coming off last month's 96-second stoppage win over Malik Scott that made him the mandatory challenger to the winner of a May 10 clash between Bermane Stiverne and Chris Arreola for the WBC title vacated by Vitali Klitschko. Stiverne was a unanimous-decision winner over Arreola in April 2013.

"I saw Wilder's last fight. I saw him knock out the young guy, Scott. I don't know much about Scott, but we've got to see what happens when Wilder starts getting hit and beat on," said Tyson.

"Anybody can knock anybody out. I've got a 3-year-old son who can knock somebody out. … We'll see what happens when somebody hits him just like he hits them."

Jennings, 29, will be involved in a second mandatory ordered by the WBC against Mike Perez, the winner of which will face that between Wilder and the victor of the Stiverne-Arreola matchup. Jennings was last in the ring for a 10th-round knockout of Artur Szpilka in January.

Tyson, who shared his thoughts during a Monday conference call alongside Showtime Sports boss Stephen Espinoza, was promoting an April 18 card in Monroeville, Pa., which will take place under the banner of his company, Iron Mike Productions.

Tyson called the relationship with Showtime, "the beginning of a dream come true."

"This is our first show with Mike Tyson. Certainly, last but not least, it is Mike's return to Showtime. There are a lot of people at Showtime who have a lot of affection for Mike and we welcome him with open arms," said Espinoza, who once represnted Tyson as an attorney with the Ziffren Brittenham LLP law firm. "Personally, I've known Mike for quite a while in a couple of different capacities, and it gives me more pleasure as a television executive and as a friend to see Mike segue very successfully into this part of his career."

Tyson's matchmaker, Chris Middendorf, called their initial endeavor with Showtime "a significant milestone," and, "just the beginning of things to come."

The co-feature will match Felix Diaz (14-0, 8 KOs), who won an Olympic gold medal for the Dominican Republic in 2008, in a welterweight bout against Emmanuel Lartey (15-1-1, 7 KOs) of Brooklyn by way of Ghana, with the opening bout of the telecast featuring local war veteran Sammy Vasquez (13-0, 9 KOs) of Monessen, Pa., against Juan Rodriguez Jr. (11-0, 5 KOs) of Union City, N.J., in another welterweight bout.

"Mike and I have a long history, and I've always wanted to support him personally and professionally. But, more than that, he's got good fighters, and they're willing to match them tough," said Espinoza.

"Anybody who is willing to meet those requirements, that's going to get our attention … We want to highlight and feature the most talented guys in the toughest matchups, and that's what we're going to get on April 18."

Salka was last in the ring in December, when he lost a junior welterweight bout against Ricardo “Dinamita” Alvarez, the 32-year-old older brother of Mexican star Saul "Canelo" Alvarez, by disputed majority decision at the Alamodome in San Antonio, Texas.

Diaz, 30, is facing a man in Larte who is coming off his lone defeat, by unanimous decision to unbeaten Errol Spence in October. Vasquez, 27, is a local hero and a fighter who put his boxing career on hold to serve his country with two tours in Iraq.

"There is no higher pinnacle than fighting on ShoBox and Showtime, the two premier boxing establishments," said Tyson. "One is for starting the younger fighters, and one is for the premier fighters."

During the conference call, Espinoza addressed the tepid relationship between Showtime and HBO, and, without mentioning them by name, the rift between promotional giants Golden Boy and Top Rank.

Showtime almost exclusively televises fighters from Golden Boy, with whom HBO has severed ties, and HBO does the same with Top Rank. In addition, HBO and powerful boxing advisor Al Haymon rarely do business with each other, and most of Haymon's fighters are aligned with Golden Boy.

"To be candid, the main conflicts really aren't network to network, since really the networks don't typically work together. There was only one time in their history that the they did, and that was obviously an event that Mike was involved in with the Lennox Lewis fight," said Espinoza, referring to Tyson's eighth-round knockout loss to Lennox Lewis in June 2002, when Tyson was with Showtime, and Lewis, with HBO.
"So, it really has more to do with personality than promotional alignments, and I think, right now, that's an unfortunate reality of the sport. I'd like to think that I come to it with very much a fan perspective, and I think that we at Showtime make the fights that we want to see as fans. Hopefully, through that enthusiasm, that passion and that commitment, the right fights get made. When I look at this card on April 18, that's a very good example of that. Whether that's going to be enough to overcome some of these challenges, I don't know, but I do know that we're going to continue to try."