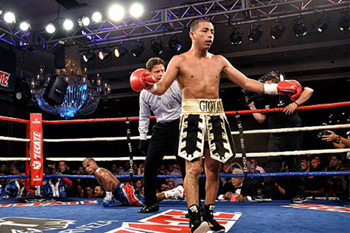 Segura’s fan-friendly style was again in full effect this past Saturday night. He broke fellow Mexican Felipe Salguero down in similar fashion as he did against Marquez, stopping the two-time title challenger in the 10th and final round at the Arena Tecate in Tijuana, Mexico. The bout headlined a Zanfer Promotions card and was broadcast on UniMas.

Segura’s 12th-round stoppage victory over Marquez was deemed one of boxing’s best fights in 2013 by most boxing pundits. The two fighters traded blows in what turned out to be an epic battle before Segura’s power and aggression finished Marquez.

Salguero had lost three of his previous six bouts before the Segura clash, with those losses against Donnie Nietes, Luis Alberto Rios, and most recently to John Riel Casimero.

While the ebb and flow between Segura and Salguero was not as blistering as in the Segura-Marquez fight, there were still numerous and effective exchanges from the opening bell. Segura landed repeatedly with straight left hands to Salguero’s head, while Salguero was able to land hooks to Segura’s head.

It looked as though Segura was one step ahead in the first two rounds, prompting Salguero to step up the aggression in the third round. He found success landing occasional uppercuts when Segura pressed forward.

It looked as though momentum might have been swinging in Salguero’s favor in the fourth round until Segura dropped him with a left hook near the end of the round. Salguero got up and avoided further punishment until the bell sounded to end the round. Things were getting more complicated for Salguero in the fifth round when he was cut over his right eye.

Anytime Salguero mounted any significant offense or was able to effectively counter his opponent in the second half of the fight, Segura found an answer by backing him up with two- and three-punch combinations.

Sensing he was down in the fight, Salguero mounted an attack in the final two rounds. He was effective in the ninth, even backing Segura up a couple of times. Within the first minute of the last round, it looked as though Salguero went for broke, but looked exhausted in the process. Sensing Salguero was done, Segura went in for the kill, rocking him with lefts and rights before Salguero slumped down to the canvas. Referee Juan Jose Ramirez waved the fight over at 1:55.

The victory could pave the wave for an eventual showdown against Juan Francisco Estrada. Segura is the No. 1 contender to Estrada’s WBO world title belt.

Piña dropped Doliguez with a barrage of punches in the opening minute of the first round. Doliguez tried to press the action, but Piña was able to effectively counter him on the inside.

The bout was stopped due to an accidental clash of heads that opened a cut over Rosas’ right eye, but up until that point Rosas was landing the more effective punches during most of the fight. All three judges scored the bout in favor of Rosas: 77-75, 78-74, and 80-72.

Rosas, from Navajoa, Mexico, improves to 39-8, 27 KOs. Gonzalez, who grew up in Zapopan, Mexico, drops to 22-1-2, 14 KOs. Gonzalez is the son of former world champion Alejandro “Cobrita” Gonzalez.