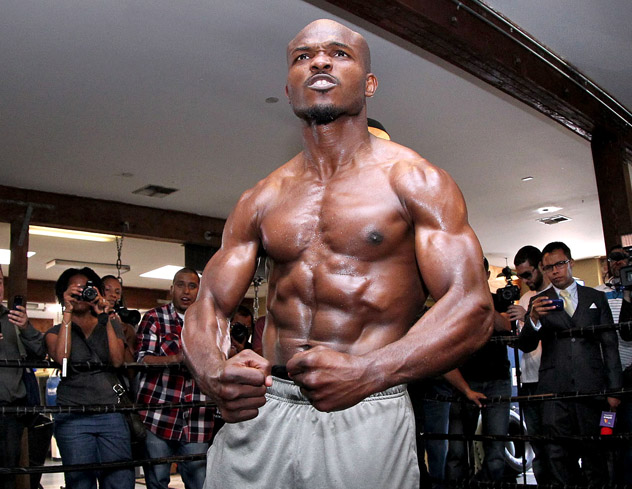 LOS ANGELES – Manny Pacquiao told the press that he isn’t going to try to force a knockout in his April 12 rematch with Tim Bradley during his media workout on Wednesday.

On Thursday, during his media day workout at the Fortune Gym, Bradley told boxing writers that scoring a knockout is Pacquiao’s only hope of beating him. However, the unbeaten WBO welterweight titleholder doesn’t see that happening.

Bradley (30-0, 12 knockouts) says if anyone is going to score a knockout in their anticipated return bout it will be him. He says he’s trained too hard and wants to win too much to allow Pacquiao to avenge what most fans and media viewed as a bad decision in favor of Bradley.

“This training camp has been hell,” said Bradley, who earned a split decision over Pacquiao in June 2012 at the MGM Grand in Las Vegas, the site of their HBO Pay Per View-televised rematch.

“Joel (Diaz) has been cutthroat because we’ve been in the ring with Manny Pacquiao. We know what to expect. Pacquiao’s extremely intense in the ring, so you have to have your focus at all times when you fight him. We trained to be focused and more intense than Pacquiao for every minute of every round.”

To that end, Diaz, THE RING’s Trainer of the Year for 2013, put Bradley through sparring routines that would make Ann Wolfe proud.

“I was sparring one round a piece with young, hungry sparring partners, and they were bringin’ it,” Bradley said. “After three or four rounds with fresh sparring partners coming in after each round, I got tired, but that was the point, you gotta be on your Ps and Qs.”

Bradley says Diaz sometimes had him spar rounds that were much longer than the standard three minutes.

“I was doing 10-minute rounds,” he said. “Ten minute rounds with only 15 seconds of rest between them, and I had fresh guys coming in with each round. It was so intense.

“We had never done that before. Doing 10-minute rounds was something new that we added for the intensity.”

Since the rematch was made, Bradley has been talking about intensity, but not his own. From the get-go, the 30-year-old Palm Springs, Calif. native has questioned Pacquiao’s intensity. Bradley says Pacquiao lacked it during their first fight and it was nowhere to be seen in the Filipino icon’s most recent bout, a one-sided unanimous decision over Brandon Rios last November. Many fans and more than a few members of the boxing media agree with Bradley’s opinon.

Nobody, however, is questioning Bradley’s intensity. Who can after the brutal 12-round war he waged with Ruslan Provodnikov last March?

Still, Bradley made it a point to state that he would bring more fire, focus and activity than ever to his rematch with Pacquiao. He says anything less could give the judges an opportunity to give close rounds, and perhaps the fight, to Pacquiao.

Is Bradley being paranoid? He says look at his last fight – a split decision victory over Juan Manuel Marque last October – for proof. Most observers believed Bradley won eight clear rounds but he had to sweat out the decision.

“That was the controversy of the first fight,” Bradley said. “The pressure is on these judges to make up for it. The judges are human. They know the public was mad about the decision in that first fight and they feel the pressure when they have to score a close round a few seconds after it ended. In the Marquez fight, any close round went to him.

“I know it’s going to be even worse for this fight.”

However, although Bradley knows there’s a good chance that close rounds will probably go to Pacquiao, he’s so confident in his preparation and desire to win that he doesn’t foresee any close rounds.

“I’m not focused on the judges,” he said. “I’m focused on only one outcome – winning again and whupping his butt so good that you guys in the media and the public give me credit for it.

“That’s what drives me, the controversy of the first fight. That controversy made me mentally tougher. In the Provodnikov fight I learned that, damn it, I gotta listen to my corner and not go out and fight like Rocky. I gotta remember that I’m a boxer and that boxing is about intelligence.”

Bradley says he will bring the right mix of heart and intelligence that was on display during his fight with Marquez to the rematch with Pacquiao, but with more – you guessed it – intensity.

“This is the only fight that I care about,” he said. “All want to do is beat him so bad and so clearly that I finally get fan approval. If I do that, anything I do after this fight is gravy. If I do that, I honestly think I could walk away from the sport and be satisfied.

“It’s that important to me.”