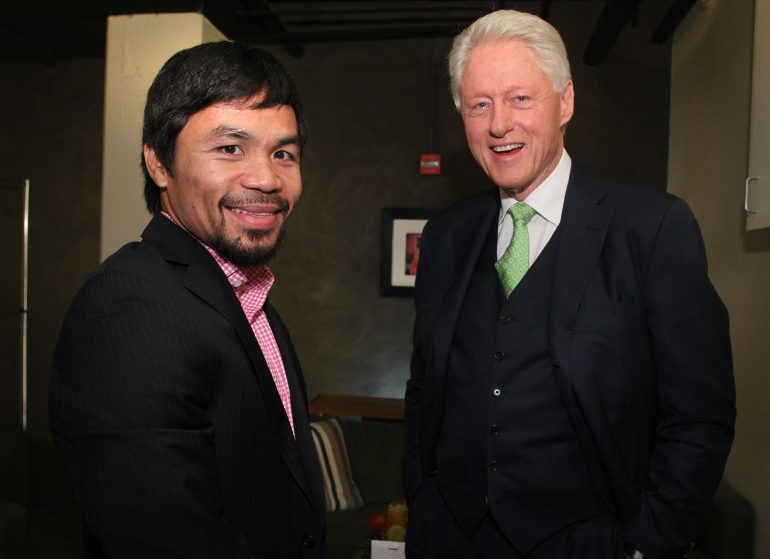 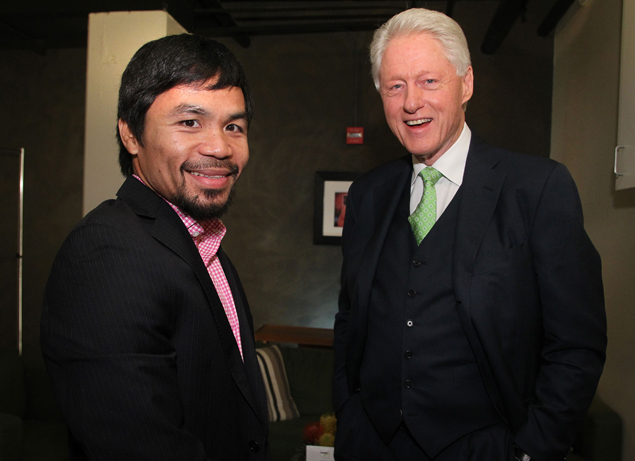 Former President Bill Clinton called Manny Pacquiao "a great guy and a great role model for the country," as well as "a very strong and honest" Filipino congressman just prior to Pacquiao's eighth appearance on ABC's “Jimmy Kimmel Live” on Wednesday night.

A congressional representative of the Sarangani province in his native Philippines, Pacquiao was backstage when the nation's 42nd president praised him during a one-on-one with Kimmel.

"You're going to have Manny on here in a few minutes. He's already in the Philippines parliament and I hope that he goes right on up the ladder," said Clinton, 67. "I think that he's a great guy and a great role model for the country and he's very strong and honest. So he's thinking about the rest of his life."

At one point during his interview with Pacquiao, Kimmel displayed a photo of the boxer standing next to Clinton in Las Vegas. Pacquiao's left fist was raised to Clinton's chest level.

"Does the secret service get nervous when you raise your fist to the president?" asked Kimmel. "Seems like a risky move right there."

Pacquiao's annual berth on the show came in advance of his April 12 rematch with Tim Bradley, who dethroned Pacquiao as WBO beltholder by split decision in June 2012.

"Right now, I'm focused on my position as a congressman," said Pacquiao, responding to a question about one day becoming president of the Philippines, "and boxing — especially this coming April 12."

During an opening spoof entitled, "Don't get mad; get Manny!", Pacquiao's character was a debt collector for hire in pursuit of those delinquent on bets to the winner of an NCAA March Madness basketball office pool.

Click here for a video of the NCAA pool skit

Pacquiao shocked a man at his desk by pounding his gloved right hand on the top of the worker's head as the debt collector stood nearby. Next, Pacquiao used the same fist to shatter a hole into a wall to the surprise of the female debtor posting notes on a board.

In a third scene, a male debtor landed on the desktop of the man to whom he owes the cash after which Pacquiao appeared from behind a partition.

"If your friends owe you money," said Pacquiao, poking the right hand at the camera for emphasis, "I will punch them on the face."

"I think most people agree," said Kimmel. "Do you think Bradley thinks knows that he lost that fight?"

"I think so but because of the pride and ego, he claimed that he won the fight," said Pacquiao, wearing a dark suit and a pink button-down shirt. "I'm not thinking about a knockout. If the knockout comes, then it comes. What my focus is is more aggressiveness and throwing punches and I want to prove to him that my killer instinct is always there."

When Pacquiao revealed that his wife, Jinkee is pregnant with his fifth child, Israel, Kimmel asked, "Are you Jewish?"

"You know, Jimmy is a nice name for a kid also. I mean, nothing against Israel but, you know, it would be nice," quipped Kimmel. "How many kids would you have to have before you named one of them after me?"

What happens if would Jinkee goes into labor during his fight?

"It's possible," said Pacquiao. "We're expecting the last week of this month."

"But would you still fight?" asked Kimmel. "Would you postpone the fight?"

Pacquiao had also shared the stage with Kimmel 16 days before facing Bradley, this after having been on the show for the fifth time, nine days before his third fight with Marquez.

Pacquiao debuted on the program three days after Halloween in November 2009 prior to dethroning Miguel Cotto as WBO beltholder by 12th-round stoppage later that month.

Pacquiao was also on the show before his unanimous decision win over welterweight Joshua Clottey in March 2010, as well as before earning the WBC’s then-vacant junior middleweight belt with a unanimous decision over Antonio Margarito in November 2010.

Pacquiao was on Kimmel’s show for the fourth time prior to the unanimous decision defense of his crown in May 2011 over Shane Mosley.