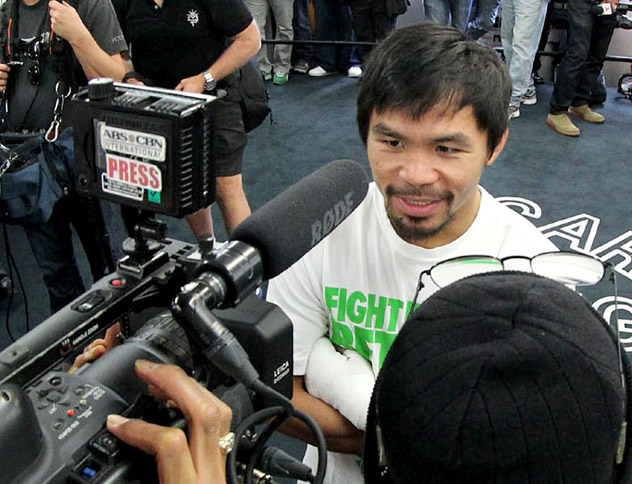 HOLLWOOD, Calif. – There’s no doubt in Manny Pacquiao’s mind that he caught a raw deal in his first bout with Tim Bradley, which he lost by controversial split decision in June 2012.

Apart from Team Bradley and the two official judges who scored for the bout for the undefeated American, most of the boxing world agrees that Pacquiao deserved the decision.

However, while Pacquaio says he used the unpopular result of the first fight as motivation to train harder for their April 12 rematch, the Filipino icon isn’t thirsting for vengeance enough to bring his own judges to the HBO Pay Per View event at the MGM Grand in Las Vegas.

“We feel we got robbed in the last fight and we want to make it right, but I’m not thinking about the knockout,” Pacquiao told a small group of reporters as he wrapped his hands in the dressing room of the Wild Card Boxing Club prior to a media workout on Wednesday.

“My focus is to throw more punches and to be more aggressive. If the knockout comes, it comes. Knockouts are a bonus from working hard.”

Pacquiao’s trainer, Freddie Roach, agrees that the best way to beat Bradley is with more activity, not more power.

Roach, who also trains Ruslan Provodnikov, is convinced that Bradley can take a shot – many of them, in fact – from a world-class puncher.

“He might be one of the toughest guys in the world,” said Roach, who witnessed Bradley come back from being badly rocked and nearly out on his feet in the early rounds against Provodnikov and then survive a late-rounds rally from the relentless Russian pressure fighter during their ‘Fight of the Year’ last March.

“We’re not going to go for the knockout. If the opportunity comes we’ll take it.”

Roach does see a small window of opportunity to score a stoppage, or at least a knockdown, against Bradley, but he says his fighter will have to set the tempo and press the action more than he did in the first bout in order to make it happen.

“Tim Bradley has good legs and he does move pretty well but he’s not a runner,” Roach said. “Manny can cut the ring off and get him against the ropes, and one thing about Bradley is that he will punch back if he gets hit. It’s in his nature.

“He loves to exchange and when he does, he swings a little wild. I think Manny can catch him during one of these exchanges.”

However, Roach says there won’t be any exchanges if Pacquiao’s activity isn’t high enough. If there’s one thing he wants to improve on from the first bout with Bradley, it is Pacquiao’s punch output.

“I thought he did well in the first half of the fight but then he coasted over the second half and only fought one minute of each round,” Roach admitted. “In the (Brandon) Rios fight I thought he was able to go back to being active for three minutes of each round.”

The Rios fight, which took place last November, was a pivotal one in Pacquaio’s career. His near points shutout over the rugged former lightweight titleholder was his first bout after his near decapitation at the hands of arch rival Juan Manuel Marquez in their dramatic fourth bout in December 2012.

Pacquiao, who was dropped in Round 3 and had scored a flash knockdown of his own in Round 5, had battered and bloodied Marquez and was going for the kill near the end of Round 6. That’s when he blindly lunged into a monster right hand from Marquez that turned his lights out.

Bradley, who outpointed Marquez last October, says that’s the last time anyone saw the “killer instinct” in Pacquiao and the 30-year-old WBO welterweight beltholder maintains that it’s gone for good.

Pacquiao welcomes Bradley’s opinion, which is shared by many fans and much of the boxing media. He views it as a healthy challenge.

“It helps when Tim Bradley says I don’t have fire,” he said. “It inspires me to work hard and prove that I still have the killer instinct and aggressiveness.”

Pacquiao hopes that Bradley brings his killer instinct and aggressiveness to the big dance next Saturday.

“I’m expecting a better Tim Bradley than I fought in the first fight,” he said. “He proved in his last two fights with Marquez and Ruslan that he’s a better fighter now. He proved his toughness against Ruslan. I’m prepared for that kind of fight.

“If Bradley is more aggressive, it’s good for me.”