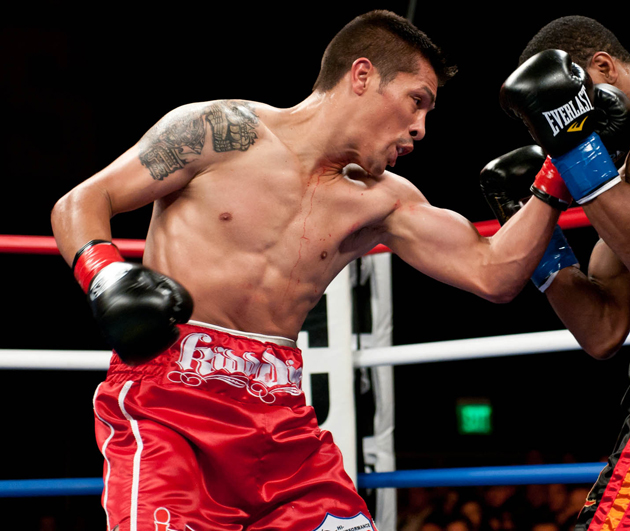 But if you ask Diaz, the 34-year-old will only concede defeat in his rematch with Porter.

"My second fight with Porter, I did lose that fight and I knew I was losing probably most of the rounds during that fight. That's because in that fight, I was just a frustrated fighter and that's about all that I was going into that fight. I was trying to rip his head off," said Diaz.

Diaz (40-9-1, 29 knockouts) has similar intentions heading into his April 26 clash with 25-year-old Keith Thurman (22-0, 20 KOs) in the main event of a Showtime-televised tripleheader at the StubHub Center in Carson, Calif.

This time, however, Diaz claims he won't be as reckless as he was in his second fight with Porter.

"I have to keep my head this time against Thurman," said Diaz. "In this case, we're going to work round-by-round and sort of break down Keith Thurman and then try to get him where I want him to be and to be able to finish off the fight."

In succession, Diaz drew with Porter in December 2012, floored Khan in the fourth round in April of last year and was outpointed in September by Porter, whose following bout was a unanimous decision that dethroned Devon Alexander three months later.

Diaz felt he deserved the decision against Khan and in the first bout against Porter, the latter of which played heavily on his mind in their rematch, which Diaz admits he lost fairly.

"To break it down, the first fight with Porter, I was very focused and very confident in what I wanted to do and I was able to execute my game plan, which was to start out really slow, break him down and get momentum. That's what I did and I feel like I won the fight. When they scored it a draw, that just confirmed to me that I won the fight because I knew that was my win. With Amir Khan, we did almost the same thing," said Diaz, whose older brother and trainer, Joel also works with WBO 147-pound beltholder Tim Bradley.

"Amir Khan is very fast and our game plan was to start out slow and to develop our timing. Once I had that timing down, it was time to go to work. I felt like I was in control the entire fight and that I was never in trouble and never on the ropes taking punches. I dictated the whole fight and had him hurt a couple of times. I had Amir Khan in trouble almost the entire fight and he was in survival mode almost the whole fight. There was no point where he took control and was getting anywhere. That was all me."

Diaz lost the belt he won from Jauregui in his following bout by 10th-round stoppage against Jose Luis Castillo in March 2005.

During his second reign, Diaz made one successful defense of the title, stopping Jesus Chavez in the third round in February 2007 before being dethroned by Juan Diaz in a ninth-round knockout loss in October 2007.

Diaz believes his veteran experience, as well as his motivation from coming up short against Porter and Khan, will be the difference in what is shaping up as a firefight against Thurman.

"Thurman will be a tough fight but my performances have gotten me to the point where I am right now. So I believe that people appreciate my performances," said Diaz.

"I definitely honestly feel like I won the first Amir Khan fight and the first Shawn Porter fight because I was in complete control most of the time. This will not be an exception. This fight with Keith Thurman, this will be a win in my favor."

WBC TAKES A HARD STANCE ON MANIPULATION OF BOXING GLOVES

WBC President Mauricio Sulaiman spoke to RingTV.com on Monday about "a comprehensive campaign against the manipulation of boxing gloves."

"The focus and the aim is to alert coaches, boxers, managers, promoters and matchmakers of the horrendous risks of tampering with boxing gloves for both the fighter wearing them and delivering the blow as well as the opponent who gets hit," according to a release authorized by Sulaiman, which declares the manipulation of gloves to be "a criminal act."

"There is a campaign by the WBC against glove tampering. So we are doing a whole campaign regarding hand-wrapping and glove chain-of-custody to prevent people from tampering with the wrapping of the gloves, which has been done in many, many countries for many, many years," said Sulaiman, during an interview with RingTV.com.

"There is another thing involving gloves. We have started a certification worldwide even though we have been testing gloves for more than four years. We have a list of gloves that are approved for their uniformity and materials that are safe and which have quality control."

The following is a list comprised of the brands of gloves evaluated and approved, per Sulaiman.