Manny Pacquiao: ‘I will need to outbox, outspeed Tim Bradley’ 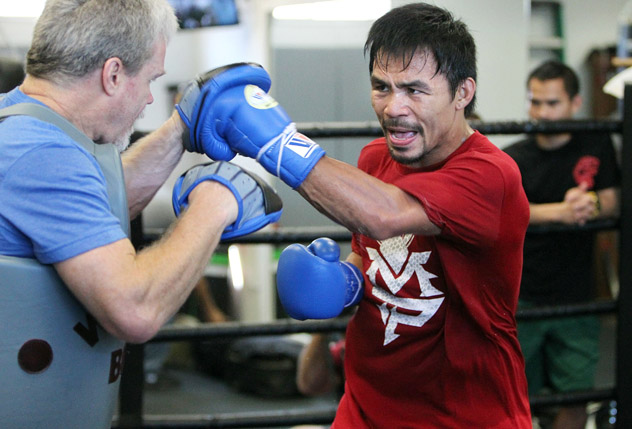 The following are the third round of training camp notes for Manny Pacquiao in advance of his April 12 rematch with WBO welterweight titleholder Tim Bradley, who dethroned Pacquiao by split decision in June 2012.

During two fights over the course of 2012, Pacquiao lost to Bradley before falling by sixth-round knockout in December of that year to Juan Manuel Marquez, against whom Pacquiao is 2-1-1. Pacquiao won his most recent fight in November by unanimous decision over Brandon Rios.

Click here for a video of Pacquiao's greatest hits

In his past two fights, Bradley rose from a 12th-round knockdown to unanimously decision Ruslan Provodnikov in March 2013 and then won a split decision over Marquez seven months later.

Question for Pacquiao: How you deal with a bad decision after the fight? You train so hard for 10 weeks, fight a good fight and the judges go the other way. How long does it take to get over that? What's different in training this time around, knowing you can achieve revenge?

Pacquiao: That is boxing. It is part of the game and you cannot let yourself get too upset over it or else it will consume you. Judges are human. You cannot expect them to be perfect.

In the first fight against Tim Bradley, I was over it before I returned to the dressing room. To Freddie Roach and me and apparently everyone else who watched the fight — except for two — I won the fight.

The first thing I said to Freddie when we saw each other in the dressing after the fight was, "[Bradley] ran just like we knew he would." We never discussed or debated the decision because it was so obvious that I had won the fight and nearly every round.

It never felt like a loss to me and no one treated me any differently. I was treated as the winner. I just moved forward and began training for my next fight, which was against Juan Manuel Márquez.

There is something different in this training camp. There are a lot of people who doubt I can fight the same way I fought when I knocked out Oscar De la Hoya, Ricky Hatton, Erik Morales and Marco Antonio Barrera. I want to prove to them that I am the best.

I am inspired. I am the challenger. I know I will need to outbox and outspeed Bradley and that is what I will do. This is the first time I have challenged for a world title that I lost. Do I want it back? You bet I do and I want it back from Tim Bradley.