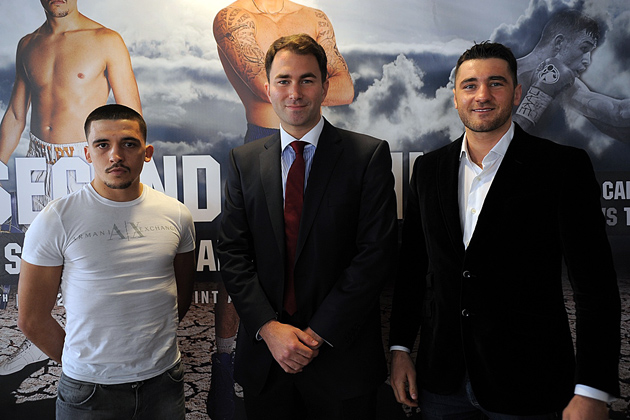 Eddie Hearn of Matchroom Sports announced at a press conference at St. David’s Hotel and Spa in Cardiff last week that Welsh duo Nathan Cleverly and Lee Selby will co-headline a bumper show on May 17 against opponents soon to be announced.

'The card will be live on Sky Sports from the Motorpoint Arena, Cardiff.

“I’m delighted to be back in Wales after the huge success of our February show,” said Hearn. “It’s great to be teaming up with Nathan Cleverly and Lee Selby is now on the verge of a World Title shot, so it’s a huge night for both men.”

It will be first fight for Cleverly (26-1, 12 knockouts) since he lost the WBO light heavyweight title last August against fearsome Russian puncher Sergey Kovalev.

Since then the 27-year-old college graduate has looked to return to the ring on several occasions only to pull out through injury. Now nine months later he’s ready to return to action, stepping up to cruiserweight.

After so long on the sidelines Cleverly is eager to return to action.

“I’m excited to get back into the ring on May 17,” said Cleverly. “There are some big fights in the division, I’ve had a great rest and had a chance to lead a normal life and I am ready now to start a new chapter.”

It marks an interesting turn of events for Cleverly who has been aligned with Frank Warren for his entire career. Though not signing promotional forms with Matchroom, Cleverly will be working with them on a fight-by-fight capacity.

“I took a long time to decide, it was a tough decision. I was out of contract with Frank Warren so I had the choice, do I re-sign with Queensbury Promotions or do I go with Matchroom and Eddie Hearn,” Cleverly said.

“There were two great opportunities on the table but ultimately I felt the best move for my career was with Matchroom, Eddie Hearn and Sky Sports. I felt more inclined to that direction because that was the one that was exciting me more, being back on Sky, showcasing my skills, to bring the buzz and excitement back.

“I’ve stayed loyal to Frank over the last two years; it’s been a great chapter one. I’ve been living the dream as a world champion but there has been problems. It has been tough for me, mentally. It’s been very, very stressful. It was starting to affect me, it was starting to effect my performance, my training, my mental attitude and so I wanted to leave that behind and it was only fair to myself that I moved on and had a fresh start.”

Though no opponent was named it will be a further examination of Selby’s credentials before he hopes to challenge for a world title in the not too distant future.

“I'm so close to achieving my dream of being WBC champion,” said Selby. “I think I am good enough to hold my own with any featherweight in the world, but I want to win the title and defend it, so that’s the goal that we are building towards.”

Also on the card will be an intriguing lightweight rematch between Gary Buckland (28-3, 9 KOs) and Gavin Rees (37-4-1, 18 KOs). The first encounter produced a Fight of the year candidate with Buckland winning a split decision by the slimmest of margins 116-113, 115-114 while the dissenting judge scored for Rees 116-113.

Going into the first fight Rees said if he lost he’d retire, but the closeness of the contest and Rees believing he won led to him ask for a rematch, something Buckland was all too happy to accept.

Liverpool’s rising super middleweight prospect Callum Smith (9-0, 7 KOs) will be fighting on front of a partisan crowd for the first time as a pro when he takes on Tobias Webb (14-1-1, 2 KOs) over 10 rounds.

The 23 year old hasn’t fought since last October and will first see action on April 19 in Manchester.

Jenkins, 25, is primed to make an assault on the British title currently held by Curtis Woodhouse later this year.

Also scheduled to appear is Andy Lee (31-2, 22 KOs), who first has to get through a fight on April 14 in Denmark. Hearn mentioned that Lee, a former middleweight title challenger, is looking at dropping down to junior middleweight.