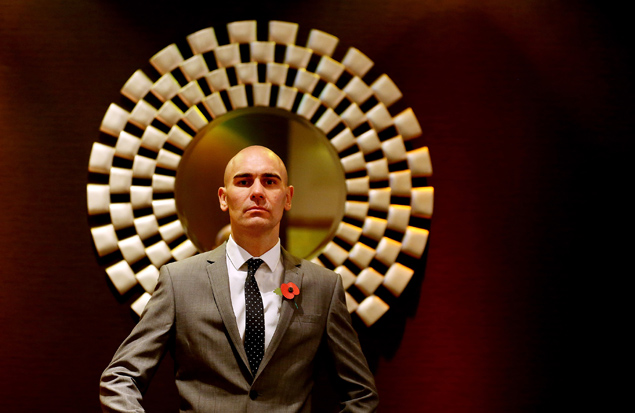 British standout Stuart Hall retained his IBF bantamweight title via anticlimactic technical draw in a bout with countryman Martin Ward in Newcastle, England on Saturday. The official time was 0:35 seconds of Round 2.

It was orthodox champion versus southpaw challenger and towards the end of the opening session both men led from their power side simultaneously, causing the skulls to collide violently. Ward got the worst of it and, as he pulled away, blood began pouring from a wound above his right eye.

The clock was ticking on the challenger’s participation and the referee waved the bout off when it became clear that Ward was having trouble seeing.

“It’s just one of those things,” said Hall, when interviewed by BoxNation. “I thought it was a punch, but the referee said it was a clash of heads.”

It definitely wasn’t a punch and a technical draw, if the bout goes less than four completed rounds, is the mandatory verdict following such an incident.

In Round 1 Hall looked noticeably bigger than the challenger and managed to rough him up once or twice on the inside. Ward backpedalled, picked a couple of nice counters and was still competitive, which made the premature stoppage extremely frustrating for all concerned – including the crowd.

Hall (16-2-2, 7 knockouts) won the vacant IBF title in December with a thrilling victory over teak tough South African Vusi Malinga. The 34 year old got off to a great start, flooring his man in Round 3, before being dragged into a serious war of attrition, which he eventually won unanimously on the scorecards.

On the other hand Martin Ward’s credentials were questioned coming into this fight. Despite being ranked just inside the Top 15 with the IBF, and holding a Commonwealth strap at 118 pounds, the vast majority of his opposition was undistinguished and, for the most part, he was written off.

Still, the 26 year old was given no chance to disprove his critics and he is very unlikely to get a second chance from Hall, who will be anxious to move on.

“This was my time,” said Ward. “I wanted to shine and Stuart Hall wanted to confirm that he was world class, but neither of us got the chance to do what we wanted.”

Champion and challenger weighed in at 117 and 116.25 pounds respectively.