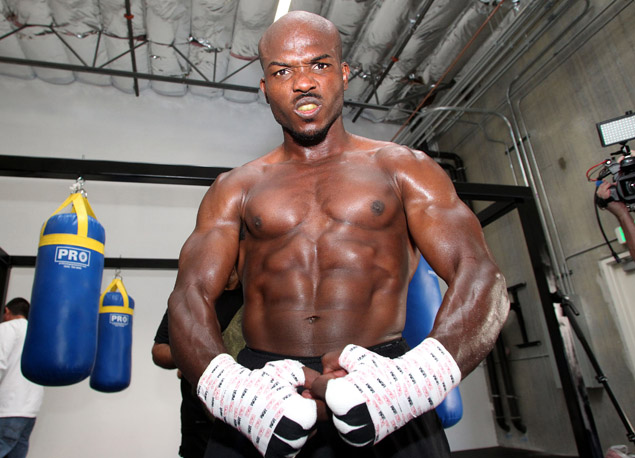 But even if he is victorious against Pacquiao, Bradley knows that his legacy won't be complete until it includes Floyd Mayweather Jr. (45-0, 26 KOs), who is No. 1 in THE RING's pound-for-pound ratings ahead of RING super middleweight champion Andre Ward and Bradley at Nos. 2 and 3, respectively.

"It's not about how badly I want to fight Mayweather, because Mayweather knows that I want to fight him at the end of the day, and that's any time, any place, anywhere, man," said Bradley, a former 140-pound titleholder. "It's about how badly Mayweather wants to fight me. Whether I fight him or not, my career is going to go on, and my legacy is just going to keep on building. Whether he's here or not, I'm just going to keep on doing my thing and keep on winning.
"At the end of the day, Mayweather is his own boss, and if he wants to come see me, then he can come see me. I've got people that are working for me and who are building me, you know, with Top Rank, my wife, who is my manager, and [Top Rank President] Todd duBoef, and HBO. If Mayweather wants to come and see me, then he can come and see me. He's his own boss, he's said that over and over again. If he wants the fight to happen, then so be it."

But there are several stumbling blocks to a Mayweather-Bradley fight.

Mayweather is contractually bound to Showtime, which will televise the May 3 defense of his RING and WBC 147-pound championships against WBA counterpart Marcos Maidana on pay per view from the MGM Grand.

Mayweather is also advised by HBO nemesis Al Haymon and has a close working relationship with Golden Boy Promotions, with whom HBO has severed ties. In addition, Mayweather refuses to do business with Top Rank CEO Bob Arum, the promoter of Bradley and Pacquiao.

Still, Bradley believes that the fight can happen, but only if Mayweather truly wants it.

"I would never shy away from fighting the best, and Floyd Mayweather is one of the best fighters in the world, if not the best right now, and he's his own boss," said Bradley. "I know that at the end of the day, everybody is going to want to see the fight, but the business part of boxing is completely different now, guys, and it's not our fault. That's just the way that it is."

Bradley attended the post-fight news conference in a wheelchair following his victory over Pacquiao, having pulled the ligaments in his left foot and strained ligaments in his right in the second and fourth rounds, respectively.

So incensed was Bradley at the general backlash from his win over Pacquiao, that he "fought angry" against Provodnikov, unwisely waging a toe-to-toe battle during which he had to rise from a 12th-round knockdown before securing the win last March.

Bradley ended a 15-bout winning streak that had included eight knockouts for Pacquiao, who was subsequently stopped in the sixth round by Marquez in December 2012.

"That just says that I am one tough cookie.  Even on my worst day I am hard to beat.  So when I am 100 percent, it's going to be harder to beat me," said Bradley. "I am so mentally tough no one can break me. I have said it many times, and said it to his face: If he does not knock me out, he is not going to win."

"Marquez is one of the best boxers in the game, and I out-thought this guy. Marquez has been in there with all of the best fighters in the world. Mayweather included," said Bradley, of a fight that was scored, 118-110 for Bradley by RingTV.com.

"Manny hasn't been in there with Mayweather, but Marquez has. That was a sensational boxing lesson that I gave Marquez that night, and one of the best moments I have had in my career, because I had fun, man. I enjoyed how it was working and what I did in that fight in the ring."

Bradley was awarded the decision over Pacquiao by scores of 115-113 on the cards of official judges C.J. Ross and Duane Ford, Jerry Roth had the same score for Pacquiao and an informal poll of 51 writers favored Pacquiao over Bradley, 48-3.

"That decision was two years ago, and you're not going to change the decision. You just go on with your life, and you do the best that you can in a fight that's going to take place on April 12. So would you be exorcised any more by a decision that happened years ago. It was what it was," said Arum, during an earlier interview with RingTV.com.

"You move on. I think that we all feel that way. Whatever it was, it was. Duane Ford is no longer judging. C.J. retired in disgrace after another crazy decision, and hopefully, the Nevada Commission will appoint judges from all over the world for this fight that will give a fair result if the fight doesn't end in a knockout."

Since Bradley-Pacquiao I, the search has been on for a replacement for Keith Kizer, who has resigned in January as the NSAC's executive director. The commission has announced its 10 finalists for Kizer's position, and NSAC chairman Francisco Aguilar hopes to have one in place before Mayweather-Maidana.

Arum said he expects the judges to be selected by the commission in early April after receiving input from the Bradley and Pacquiao camps.

But given everything that has transpired, does Bradley believe he can win a fair decision against Pacquiao?

"Isn't that what happened with my fight with the controversy? Even though I won the fight, everybody said that I didn't win, so I didn't win. They didn't give me credit. So I want the credit from the fans this time, I want the credit from boxing for beatin this guy, and I'm going to beat him decisively this time, no questions asked. I want to beat him to the point where nobody has any doubts. I want it to be that Tim Bradley clearly and handily won the fight."

BEING UNDEFEATED 'DOESN'T REALLY MEAN ANYTHING,' SAYS BRADLEY 'I WANT TO FIGHT THE BEST'

Bradley owns unanimous decision victories over IBF welterweight titleholder Lamont Peterson, ex-beltholders Kendall Holt and Devon Alexander, a split-decision over Junior Witter, and a knockout over Joel Casamayor. Bradley also has handed hard-hitting Luis Carlos Abregu his lone defeat by unanimous decision, and been in the ring for a no-decision against former titleholder Nate Campbell.

So how does it feel to have nary a loss nor a draw on his record?

"That's important to me. Maintaining my '0' is great, man, but every dog has his day. It may not be against Manny Pacquiao in this next fight, but maybe it might be down the road. I might lose, and I might not. You never know, man. Things happen in the ring when you least expect it, and sometimes it only takes one punch to end the night. So, at the end of the day, my '0' doesn't really mean anything to me. It's just there. I beat everybody that they put in front of me. That's all that it means. But I want to fight the best."